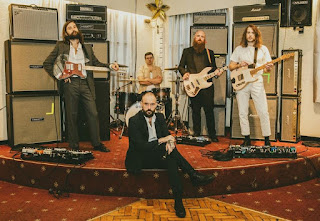 Hear the new stomping track from Idles and the new pummelling banger from Baauer.

UK rock band Idles have announced a new album, Ultra Mono, scheduled to be released in September, as well as releasing this new single ‘Grounds’. The growling guitars and pounding percussion sound almost industrial, while Joe Talbot’s snarled lyrics are typically provocative: ‘Not a single thing has ever been mended/ by you standing there and saying you’re offended/ Go ahead, tell them what I’ve intended/ I’ll say what I mean, do what I love, I’ll fucking send it’. I also found the ‘can you hear that thunder’ line pretty spooky, considering there was a thunderstorm going on outside while listening to the song.

These new singles from Baauer are some of the hardest EDM tracks I’ve ever heard. The kick drums sound like cannons and the choppy sampling sounds like a war chant. The dreamy melodic synths that break up the track help to add some prettiness (as well as making each drop hit ten times harder). The track comes off the producer’s new album Planet’s Mad.

This is Guerilla Toss’s most normal-sounding song to date. While their recent albums have slowly strayed away from their noise rock roots, Kassie’s vocals were still pretty loopy on Twisted Crystal. Besides the slightly unusual time signature, this is a fairly straightforward synthpop track with not a single loopy vocal inflection. It’s deliciously groovy and I’m digging this potential new direction for the band.

Logan Richard is a singer-songwriter from Charlottetown. According to his Facebook bio, his interests include ‘cats, grapes and tacos’. This new song ‘Everyday’ is a blues/rock/soul hybrid about being madly in love. While I’m not usually one for soppy love songs, this track really captures the happy glow of being in a relationship. I love the upbeat bluesy guitar riff that opens the track and the way in which the rest of the instrumentation surges in at 0:35.

This track has been getting some flack, mainly because of the second dude’s well-spoken verse (some of the comments under the video are hilarious – somebody said he sounds like he's rapping in Times New Roman). Personally, I think it’s cool that he’s using his normal voice instead of trying to sound ‘hood’. Besides, he’s got bars and the beat is fire – what’s not to like?

A collaboration between 6ix9ine and Nicki Minaj was almost certain to end up in my worst tracks of the week. The track sees the polarising pair taking shots at haters (i.e. people like me), but 6ix9ine swiftly veers off topic, rambling on about his ‘Benz truck’ and his ‘Rolls Royce’, as well as delivering a chorus of auto-tuned nonsense. Nicki steers the track back on course with some pretty entertaining diss bars, but by then the damage is already done.