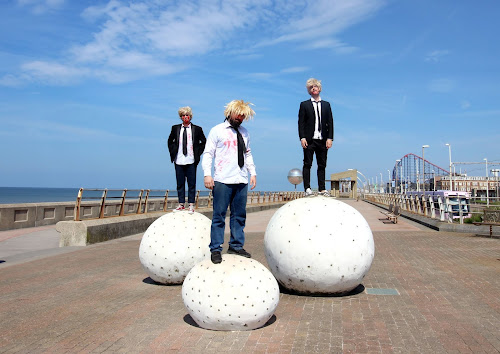 As self-described on their Bandcamp page, they’re ‘a post-hardcore, calculator-punk band from Blackpool, formed late 2018, shouting about some stuff that’s made them vexed’.

Dressed in dishevelled suits and blond wigs while sporting tracks titled ‘Boris Johnson and the Big Red Bus of Bullshit’, this band make no attempts to hide their political views (personally, I get the sense that they’re not big Bojo fans – but, hey, that’s just a hunch.).

A lot of other musicians recently from Stormzy to Idles have been voicing their disdain for the current Tory government. However, I don’t think any band has quite taken things to such comically caustic extremes as Those Fucking Snowflakes. In fact, it’s quite thrilling to hear a band in 2020 that’s this outspoken (it’s not just Tories that experience their wrath either, but also Trump, meat-eaters and Morrisey).

It helps that they’ve also got some exciting musicianship to offer. Their new EP Straight Wealthy White Male Suffrage kicks off with twangy Nirvana-esque guitars and then dives into some turbulent distorted riffage more akin to TPTBUTET all within the first minute, setting the tone for the chaos to come. It’s raw and punky, but equally intricate and proggy. You can stream the EP below.

I decided to do a Q and A with the band to find out more about their ‘calculator punk’ sound, their political views and the music they’ve been listening to recently. You can check out the interview below.

If Those Fucking Snowflakes was a pizza, what toppings would it have?

BP (vocals/guitar): Vegan gammon, jalapeños and the contents of an Oven Ready Brexit Deal. No cheese.

Your new EP Straight Wealthy White Male Suffrage is a lot of fun! What was the writing and recording process like?

BP: The writing part was good, we practice weekly and just thrash the basic ideas out. ‘Weak Men Fear Strong Women’ took us a while to finish writing as there was a lot of counting and time signature fiddling in the middle bit whereas as ‘Meat Is Murder But Morrissey Is A Dickhead’ was done in one practice, we never meant to record it - it was just a cheap laugh for us. ‘Boris Johnson and the Big Red Bus of Bullshit’ was the second song we wrote as a band, it used to be called ‘Slow Song’ as it was pretty slow but that changed pretty quickly. You can still hear echoes of what it was at the very end.

The recording was less fun, the drums and guitars were done in our practice room in one day in January 2020 (maybe early Feb) and it was freezing with the wind coming through the windows - I couldn’t feel my hands by the end of the day but wanted to get it all done. Doing the vocals was odd, we did them in the cupboard at Shaun’s house - the kids were there at one point so hopefully they didn’t hear any lyrics. Shaun is setting up a proper recording room in Blackpool town centre now under the name REC, so it should be warmer next time.

DW (bass/vocals): Recording this one was weird, in hindsight we recorded it at just the right time. There were a couple of issues with the bass tracks and we were planning on going back and fixing them but then lockdown happened, and we couldn't meet up again. Luckily Shaun was able to do something with what we had already, and it turned out fine. If we had left it a week or so later to start, we would have been screwed.

What’s lockdown been like in Blackpool? How has the pandemic affected the band?

BP: We couldn’t practice for a while as our room is above a pub, so we were shut down - so about 9 or 10 songs got written at home and we’ve been working through them all since we got back in the room in June (I think it was June, time passes strangely at the moment) but we are catching up - two of the lockdown songs are being recorded next week for a new EP. All our gigs were cancelled as well, and we have nothing booked yet. It’s frustrating but necessary.

It seems like business as usual here in Blackpool though, there’s tourists, all the tourist stuff is open - it’s quite worrying, nobody seems to be exercising any caution really. There’s definitely a second wave on the horizon. Might stock up on the chickpeas now.

DW: I'm not sure Blackpool is any worse than anywhere else, maybe we have a few more people coming on their holidays. I was in Southport over the weekend and it was just as bad, but posher.

BP: We need about 7 x 50 to do it. It’s basically just trying to overcomplicate your songs as much as possible, makes them more fun to play - adding odd changes and trying different time signatures whilst still sounding like easy to play punk music. Never settling on a standard song structure and trying to find different ways to play the songs other than 3 chords in 4/4. It’s not very easy listening though but we enjoy it. 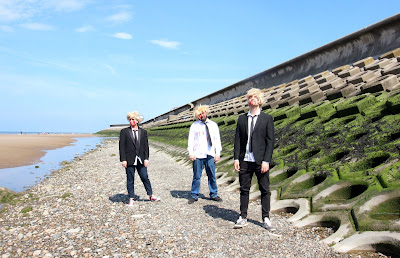 You guys aren’t shy about your political opinions. Have any Tory music listeners ever taken offence to your music? What would you do if Boris Johnson turned up at one of your gigs?

BP: At our second or third gig a punk suggested we ‘drop the political stuff as people won’t like it’, we didn’t obviously.

The band started just to get all these frustrations captured into a medium where I can literally scream the anger out and leave that feeling of helplessness trapped within the song. It’s less political statements and more expressions of fear and loathing. These are things that bother us but you can only spend so much time arguing pointlessly on twitter about it, we’ve stated how we feel if people disagree that’s fine.

I’ve always been a great believer in trapping your anger and sadness in a song and leaving it there so you can go about your life and only bring it out when you play the song, I had the same approach with one of my last bands but the thing that bothered me more then was dealing with depression and sadness so the songs were more personal. It’s the same approach I’m just worried about bigger things now. It’s a kind of therapy.

I'd probably grab Boris by the boobs if he turned up and just keep screaming 'whhhhhhhyyyyy' into his face.

DW: There was a gig in Stockport a while ago where a drunk old guy tried to cause trouble. It was right before we played "Stop being Dickheads to each other" so it ended up fitting into the show. We couldn't have planned it any better really. But we don't usually have any problems.

BP: Ah yeah, I remember the Stockport gig - he was saying something about ‘gingers’ in the first band’s set. When he started saying stuff when we played, I dedicated ‘dickheads’ to him and just played over him when he tried to reply. I think he didn't take offense to us in particular, he was just a drunk and obnoxious bellend.

Piers Morgan seems to be pivoting to an anti-tory stance and venting his frustrations at how the general public are getting screwed over, whilst I appreciate that some of his opinions recently seem to be more focused on people helping each other I still find him very dubious. I think Kanye West had serious mental issues and maybe needs help, the others on the list are just obnoxious dickheads all day every day.

What are your tips for defeating a 'Gammon Faced Vampire'?

BP: Greggs Vegan Sausage Roll, straight to the chest. Or just ignore them. These people just crave attention, whether it’s negative or positive they don’t care as long as people are paying attention to them, attention is the blood they steal from their victims - they feed off it like vampires and if you cut the source off they will wither and die.

What music have you been listening to recently? Anything fans wouldn’t expect?

BP: According to my last.fm (yeah I still use it) for the past 90 days I’ve listened to METZ, Ringo Deathstarr, Santigold, Billy Nomates, Tomahawk, Girls In Synthesis, Austerity, SNFU, Godspeed You Black Emperor and Asian Dub Foundation quite a lot. I’ve liked stuff by TV Priest, Benefits, Panic Shack, and ex-girl recently as well. I still listen to Emma Ruth Rundle a lot too.

What’s your favourite album of the 2010s?

BP: Gangs by And So I Watch You From Afar, I finally got a vinyl copy of it last year after looking for years. I kiss it every night before bed. I have the band logo tattooed on my arm from when my old band got to play ArcTanGent festival with them and I hung out with Rory for a bit, he was double nice.

What does the future hold for Those Fucking Snowflakes?

BP: We start recording six tracks next week for a new release, it’s hopefully coming out on vinyl at the start of next year. It’s a mix of a couple of old songs, newer ones and two new ‘written over lockdown songs’ - we can’t do gigs so we are just going to carry on writing. It contains the lightest song (it’s not that light though) we’ve ever done and the loudest heaviest one we have ever done. It’s pretty dark and as much as I hate describing music as a rollercoaster it is a rollercoaster of sounds.

Hopefully after this new EP were are about to record (is six tracks an EP or mini-album?) is released someone will throw a bit of cash at us to make a full album and buy a fancy new Orange Bass Amp as ours is broken. Maybe some more fake blood for the stage as well.

DW: Yeah it looks like we don't have much choice but to write and record for a while. But if this EP is a Big Dipper then the next EP will be The Big One. (Pleasure Beach reference)