Toilets - most of us are familiar with them. That is until we go to a music festival. Suddenly, toilets take on a whole new scary and alien form and the whole act of relieving one’s bowels becomes a disturbing and traumatic experience.

Fortunately, it doesn’t have to be this way. As somewhat of a festival veteran, I’d like to guide you through the art of festival toileteering as learnt the hard way.

So, without further ado let's weigh up your options.

It looks like a TARDIS, except it’s smaller on the inside. That blue industrial paper usually used for cleaning windows with is actually for drying your hands with. And the semen-like liquid coming out of that dispenser is actually soap. But let’s not get too snobby about it. This mode of toilet is luxury compared to the rest. It’s got a door, which means a certain degree of privacy (unless the lock’s broken).

This metal trough is used for urinating into. Some people choose to defecate in it because some people are degenerates. Easy access makes up for a total lack of privacy. The biggest downside to this mode of toilet is that you need to be a male to use it (unless you’re brave enough to trial out a she-wee).

PRO TIP: Don't mistake it for a sink like the dude in the video above

The Dreaded Cesspit of Doom 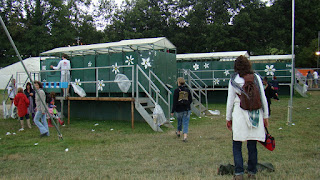 Also known as a shit-truck or a slurry pit, this evil contraption consists of a bunch of flimsy cubicles built over the top of a giant cesspool into which everyone collectively does their business. The cesspool gradually fills up as the festival progresses, the resulting stench increasing day by day, eventually transforming into a biological weapon. Cubicles contain no toilet paper or soap, no toilet seat, on most occasions no ceiling. The lack of roof leaves them open to the elements. Doors usually consist of saloon-like flaps that start at chest height and end at the knees. A total lack of comfort and a total lack of privacy is ensured.

The Improvised Toilet - e.g. a bucket, a bottle, a hat

Back to Pre-school - wear a nappy! 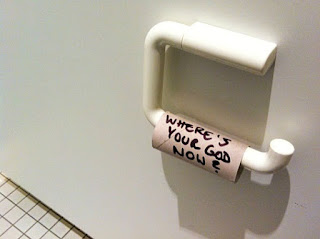 So, which is your best option?

Now that you're familiar with all the modes of toilets, it's time to establish which mode is the best. What better way than to compare each one's stats in a carefully-calculated chart.

Bloody hell, I feel like I'm writing my dissertation all over again. As you can see, I've given each mode of toilet a score from 1 to 10 - 1 being the lowest quality, 10 being the highest. One can clearly surmise from this study that the Portaloo comes out on top, racking up a total of 23 points. An all-rounder - this mode of toilet has a flush and a door and reasonable level of accessibility and cleanliness.

Meanwhile, the Dreaded Cesspit of Doom should be avoided at all costs, accumulating a score of - 654 points.

Of course, your particular festival may not even have portaloos. Reading festival for instance seems to favour only the Dreaded Cesspit of Doom. In other words, this whole study is actually quite pointless...