The 30 Worst Band Names Of All Time 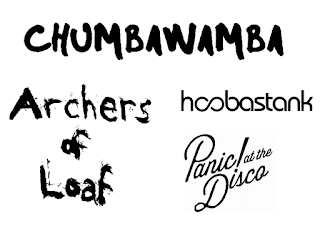 From Archers of Loaf to Chumbawamba, these are the 30 worst band names of all time.

The other day, I was thinking about how Music Related Junk is such a crappy name for a music blog. I could have gone for something fun and wacky to match the likes of Gorilla vs Bear and Aquarium Drunkard. Instead, I chose a name that implies my entire blog is rubbish. I guess there's always time to rebrand it...

Anyway, this got me  thinking about awful band names. Just like an awful blog name, an awful band name can be a major turnoff (it took me years to listen to The Postal Service simply because I hated the name). The thing that makes crappy band names so intriguing is that they are a collaborative decision. Honestly, it’s crazy to think that a group of people would collectively agree on the name ‘Chumbawamba’ or ‘Archers of Loaf’. Below are 30 of the worst offenders that I’ve come across over the years. Let me know if I’ve missed any.

Sounds like something a bunch of public school kids who’ve been watching too many Tarantino films would come out with. Surprisingly, the group are actually a bunch of middle-aged men. Anyhow, it’s by far the least terrible band name on this list...

Sounds like a law firm. Have you been injured in an accident? Call Emerson, Lake & Palmer today!

Their original band name was Starfish. Inspired by a poem, they instead went with ‘Coldplay’. QUITE FITTING CONSIDERING HOW COLD AND EMOTIONLESS THEIR MUSIC IS. Parachutes and A Rush Of Blood To The Head are actually decent albums, but this isn’t the time for a Coldplay discography breakdown, so let’s move on shall we…

Like Coldplay, Radiohead are proof that you don’t need a good band name to become successful. I always thought that their name was just a dorkier version of Motorhead (they actually named themselves after a Talking Heads song. So many different '-head' bands!).

Arguably the heaviest of Grunge’s ‘big four’, and they sound like some twinkly ambient project.

A number of bands are named after places that they have no connection with (e.g. Beirut, Texas, Asia), and the same goes for this band, who have no connection to Portugal. Of course, they’ve made things all the more obnoxious by adding ‘the man.’ afterwards, which doesn’t make an iota of sense.

You can’t bring this band up in conversation without sounding like you’ve got a stammer: ‘Have you heard of Of Montreal?’ Likewise, none of the band members of this group have any connections to Montreal (they’re from Athens, Georgia).

Boring. Of all the parts of a car to name your band after.

This one gets double points for containing an exclamation mark and arbitrary numbers.

Yes, there’s a band that is literally three exclamation marks. ‘How is that even pronounced?’, you ask. Apparently, fans call them ‘chk chk chk’.

I was going to save this for a list of bad rap names, but I may as well include it here too. The hip hop duo took the words ‘ear’ and ‘drummers’ and spelt it backwards to make ‘rae sremmurd’. It’s lame and I don’t know how to pronounce it.

15. We Butter The Bread With Butter

Pointless. Plus, I hate butter.

These guys are a metal band and they named themselves after a chick lit novel. Gay.

The age old question: are they bowling to win soup or on behalf of soup? Confusing.

I feel like soup bowling and bread archery are two connected sports.

The drone metal band’s name is pronounced ‘Sun’. That’s right, the ‘o)))’ is silent. It’s frustrating, because I always want to pronounce this band as ‘sun OOOOOH!’. They apparently stole their name from an amplifier brand logo.

And now time for some gibberish band names…

You know what’s more nonsensical than the name Hoobastank? The fact that this band were formerly known as Hoobustank and thought that changing a letter would somehow improve things.

If Mary Poppins formed a grindcore band. According to the group, it means: ‘a weird disease that contaminates carcasses, making them explode while killing everyone in a two kilometres radius’.

I know what you’re thinking. Sounds like the noise of someone feasting on soup and bread after a hard day of bowling and archery, doesn’t it? I do hope they buttered the bread with butter!

Probably the lamest attempt to make an offensive band name. What’s more offensive than one fuck? Two fucks of course!

Fascinating Fuck Fact: There are actually quite a few successful bands with ‘fuck’ in their name including Fuck Buttons, Fucked Up, Holy Fuck and Fuck. In 2008, they were all invited to play at a festival in the Austrian town of Fucking (No joke. Check it out here). To my knowledge, The Fuck Fucks weren’t invited.

I searched and I searched and this was by the far the worst band name that I could find. They’re a South African brutal death metal band. This is their logo.

It’s needlessly long-winded, unpronounceable and eye-rollingly edgy. Well done, band that I can’t be bothered to type out again. You win.