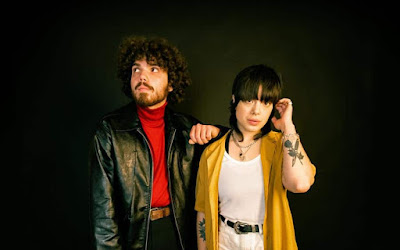 It's a mix of hyperpop, rowdy punk and squeak-rap this week.

Valeras are a rock duo from Reading. This new single ‘Rita’ is an energetic indie anthem with an addictive hook. The drumming during the verses is really inventive and I love the wailing guitars during the chorus. The video is pretty cool too (poor Rita doesn’t seem to be having a good time).

This is the type of hyperpop I want to hear more of! The track is a collaboration between producer Hijac and singers FIA and s.g.cackle. The vocals are fun and catchy (Charli XCX vibes all over it) and the bubbly beat is so feelgood. The creative video tops it off – for an amateur video, the editing skills are insane, and it really encapsulates how we all felt in 2020 being forced to live online.

Scottish punk band PERMO have dropped this new ferocious single ‘Matryoshka’. This track is mixed so loud that it hits like a brick. The drums gave me a black eye and the bass knocked my teeth out. By the end of the track I was a bloodied lifeless mess. I LOVED IT. The squealing riffs remind me of Idles but delivered with the energy of Slaves. The chorus is savage and the reverb-slathered ‘UHH!’ just before it is such a cool touch.

‘Yell At The Moon’ – Meat Wave

Meat Wave are a punk rock group from Chicago. Jagged punchy riffs play out over groovy rolling drums on their latest single ‘Yell At The Moon’. The song ends with the singer literally howling at the moon. All in all, it’s a pretty wild ride. Forget Chillwave. Forget Vaporwave. It’s time to embrace m e a t w a v e. The band is dropping an album titled Volcano Park in June.

This track follows the spoken word story of a little girl losing her doll. It plays out a bit like an ‘audiobook’ but accompanied by a slow-building electro beat. At first, I wasn’t sure what to think of it, but the way the track reaches a climax with its sung vocals ‘so hard/ to let go’ won me over – it really captures the growing exasperation of losing something and not wanting to let go. Apparently the synth work is all improvised, which is pretty impressive.

Do you think squeak-rapping will take off? Or do you think it will be like the short-lived asthma attack flow? It’s definitely creative, but I can’t endure it for a whole song. It’s like listening to a mosquito.