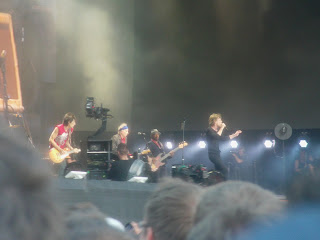 Oh my god, I've seen the Rolling Stones! I can die happily now.

I was fortunate enough to get a last minute ticket off a friend. Until a week ago, the idea of going to a Rolling Stones concert seemed as far-fetched an opportunity as having dinner with the queen. I'm still dazed from the experience. I don't mean to brag but I'VE SEEN THE ROLLING STONES, BITCHES!!!!!

It was their first gig at Hyde Park since 1969. Since then the band members have all aged a bit, as you can probably imagine. However, despite the median age of the band being 69, (lol lots of sixty-nine references), despite the fact that they're all gnarled and not as sprightly as they used to be, they're still undeniably young at heart. They're still down with the kids, they're still cool, not in an embarrassing way but in an admirable way. Running around the stage, going off for a fag break half way through the set, they still feel like rock stars. They're what every young person wants to end up like when they're old.

Support acts includes Gary Clark Jr., Temper Trap and the Vaccines. I found Gary Clark Jr., to be my favourite of the support acts despite not knowing any songs by him. His smooth, bluesy music fitted the lazy, summer weather perfectly.

Talking of which, the weather was beautiful. Too beautiful. By that, I mean that it was way too hot. Hyde Park turned tropical. Everyone was getting sunburn and heatstroke and dehydration. We were positioned near the front of the crowd which swiftly became a claustrophobic mass of sweaty bodies, shoved together like sardines. Somebody passed out behind us just before the Rolling Stones came on. How inconsiderate! They should have at least had the common decency to wait until the gig was over ( I'm kidding, by the way. I hope the dude who passed out is alive and well). A pathway had to be carved through the crowd so that the paramedics could get through and help the unconscious man. This meant getting pushed intimately closer to strangers. I must have sweated half my body weight. Once you were in the crowd there was no escape, no way to get food or drink, no way to go to the loo.

I can't decide what is worse at a concert – intense rain or  intense sunshine. Rain creates mud, distorts sound quality and makes everyone generally miserable. I guess all weather is bad. I sound so British.

When the Stones finally came on at 8.30, the heat was still twenty degrees. However, I soon forgot about the discomfort the moment the band started playing. They opened with “Start Me Up”, which immediately got the crowd going. The setlist that followed seemed to be a rejigged Glastonbury setlist. All the band's major hits came up, interspersed with less known ones including a request. Kieth Richards took the mic for two songs. Gary Clark Jr. was invited up on stage for the track, Bitch. Meanwhile, lots of trippy stuff was going on on the stage backdrop, made up of giant screens which displayed various images and footage, from giant sprouting magic mushrooms to a montage of the band's influences throughout history. The variety and energy of the set meant that time flew by and before long the band were playing their encores, ending the night with the predictable but masterful “(I Can't Get No) Satisfaction”.

The performance was near perfect. The band displayed unexpected levels of energy. The crowd participated brilliantly – no inappropriate moshing or cups of piss getting thrown around. Mick Jagger's voice was well in tune. The guitar work and drum work could not be faulted. The sound quality was just right, not too quiet or too deafening.