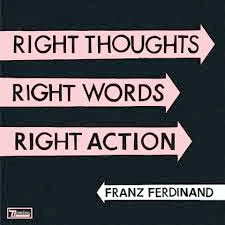 WATCH VIDEO REVIEW HERE
Franz Ferdinand was a famous Archduke of Austria-Hungary whose assassination on the 28th June 1914 prompted the beginning of the First World War. 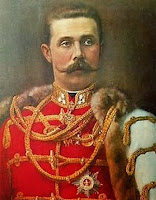 Franz Ferdinand is also an indie rock band from Glasgow, which is the one we'll be focusing on in this review.

Right thoughts, Right words, Right action is a fun, bubbly, new-wave inspired album, similar, I feel, in many ways to the latest Strokes record, "Comedown Machine" (Link to review here). It’s got groove. It’s got energy. It makes me want to dance around the kitchen.

It’s everything I expected from Franz Ferdinand and in many ways that's this album's biggest flaw: It lacks the precious element of surprise. None of the tracks particularly jump out because there are no unexpected moments. What this album needs is a sudden tempo change, a cowbell solo, an ode to Blu Tac, a chorus sung backwards, a death metal breakdown, an audio sample of two turtles mating - anything to throw the listener off guard.