Review of "The Marshall Mathers LP 2" by Eminem 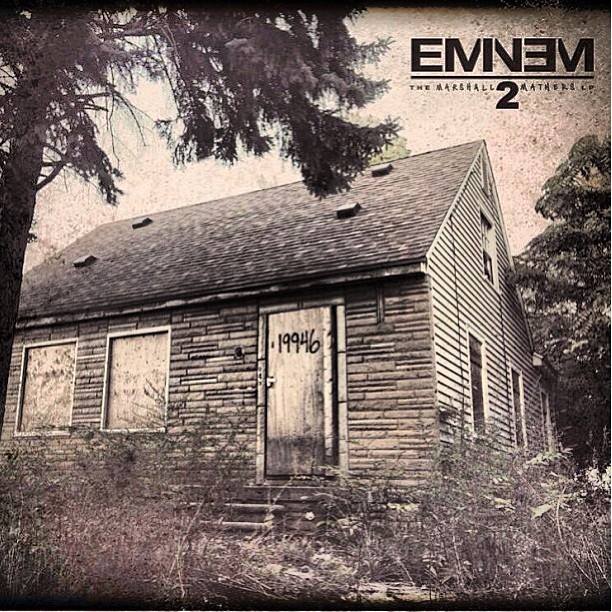 Guess who’s back? Back again (Yes, I had to use that opening line...).

This is the eagerly awaited comeback-to-a-comeback-to-a-comeback album, the final attempt of Eminem’s to put his white ass back on the hip hop throne. Relapse and Recovery, his two previous releases, failed to recapture the real slim shady. As Mathers states on the first track of this record “last album now because after this you’ll be officially done”.

Most artists come to a point where they accept they've passed their peak. Not Eminem. The Marshall Mathers LP 2 sees him with a belly full of fire, eager to prove he’s still got it, that at forty he’s still the best, that he’s more than the best, not just a rap king, but  - as the already-hit single clearly states - a “rap god”.

The last musician I heard claim that they were a "god" was Kanye West on his previous album Yeezus. I slated that album on this blog – mainly because I detested Kanye’s arrogance. If you call yourself a god you have to be prepared to prove that you are more than talented, that you are exceptional in every way.

Can Eminem get away with such a claim? Is he exceptional in every way? Arguably, yes.

The track “Rap God” is a master class on flow. Eminem’s ability to spit bars at speed whilst staying intelligible and conveying emotion is an ability that I think no rapper equals. The rest of the album proves Eminem has the full package. He puts his creativity and talent into really entertaining his listener at every possible second. The second track “Rhyme or reason” kicks off with some disturbingly hilarious imagery “It’s like handing a psycho a loaded gun/Michelangelo with a paintgun in a tantrum/bout’ to explode on a canvas” and then heads without warning into a verse delivered in Yoda-speak. When Eminem isn’t playing with shock value and comedy, he’s tugging sharply on the heart-strings with emotionally-charged tracks like “Headlights”. His mother, who he’s spent his whole career dissing for his tough upbringing, gets a truly poignant apology. It is Em’s ability to invoke such strong emotions through rap that makes him a God.

Perhaps my favourite track on the album is “Love Game” featuring Kendrick Lamar. This generation’s greatest rapper teams up with the original greatest rapper and instead of transforming into what could have been a rap battle between old and new, the song comes across a playful, fun collaboration between generations. Kendrick uses his verse to show the influence that Eminem has had on him, experimenting with different voices in a Slim Shady fashion.


It’s all been compliments up until now. Eminem undoubtedly proves himself to be the perfect rapper, which might suggest that this is the perfect hip hop album – but no it isn’t. Nearly, but not quite.

Musically, there are a few little potholes in the road, those being the beats and hooks. Some of the choruses such as on “Asshole” are just a tad too cheesy for my liking, as well as the instrumentation used on tracks like “Survival”. Also, Eminem’s singing voice can come off a little like a dying cat dragging its nails down a blackboard, such as on the track “Stronger than I Was”.


Stick to rapping, Em. You’re much better at it.

Nonetheless, I’m not going to let the odd cringe-worthy moment ruin an album for me that in other parts proves itself to be exceptional. Take this album from a rapping perspective and there’s little to fault.