Review of 'I Love You, Honeybear' by Father John Misty 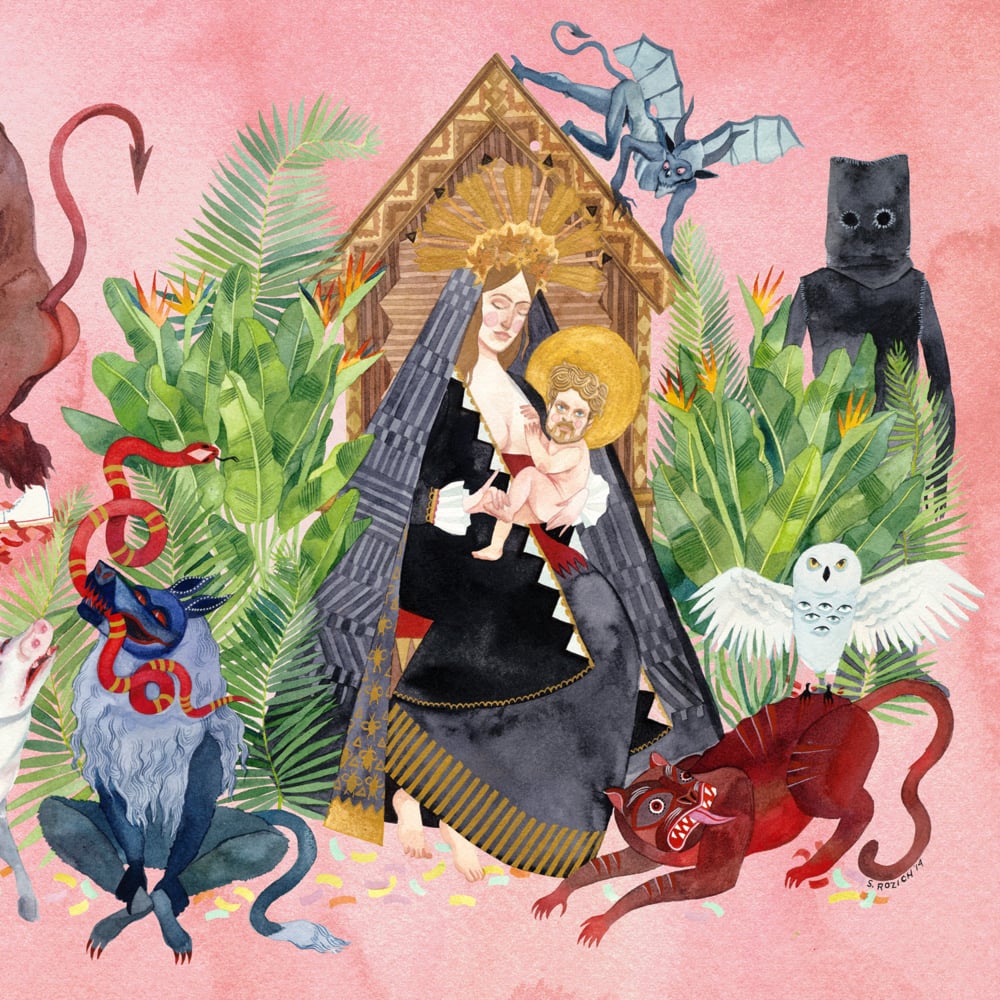 ‘Love is just an institution based on human frailty.’

Singer-songwriter Josh Tillman AKA Father John Misty is a cynical bastard. At times on the album I just want to shake him and tell him to turn that frown upside down. The ex-Fleet Foxes member seems to inhabit a world that is devoid of hope. Fortunately, he’s such a great and talented entertainer that he can sell this seemingly repulsive world to us.

Musically, I Love You, Honeybear is a dimly-lit-saloon-bar mix of folk, country and soul. There’s also an electropop song shoehorned into the mix - which doesn't really fit but it spices things up. The vocals meanwhile sound a bit like Elton John.

It’s near impossible to lump the whole thing under one genre. In an interview, Josh Tillman jokingly stated: ‘The things that emerge in true intimacy can be fairly brutal. that why it’s a metal album’.

Alright then, let’s call this a metal album. Indeed, whilst there certainly aren’t any mosh-friendly tunes on here, the lyrics are ‘brutal’ in every sense of the word. Against the pretty instrumentation it’s almost inappropriate.

As the album progresses this darker and more manic side becomes more salient. Josh goes from choking his wife to wanting to put a baby in the oven. Whilst the former could just be some kinky Fifty-Shades-Of-Grey stuff and the latter could just be a metaphor for getting his wife pregnant, the tone of Josh’s voice suggests a more violent and literal meaning.

By the end of the record, the comedy almost slips away entirely in exchange for bitterness and grief. Josh gets political, discussing this current generation as one of ‘loveless sex’ and ‘consumer slaves’ and then finishes the album on a wholly sincere downer of a track, ‘I Went To The Store One Day’, contemplating how he doesn’t want to die in a hospital.

It’s like listening to a guy slowly downward spiralling into a mental breakdown. I’m reminded of that Steve Buscemi movie Trees Lounge or a Stewart Lee stand-up. Things get so bleak and pessimistic that you no longer know whether to laugh or cry any more.

Although clearly intended to create these uneasy feelings, it’s fairly frustrating for the listener. It’s practically the opposite of Sun Kil Moon’s Benji, a similarly tragic folk album released last year, but one that seems to grow more rose-tinted as it runs, starting dismal but ending bright and hopeful.

Personally, I prefer these happy endings. Of course, that isn’t to say I Love You, Honeybear isn’t an enjoyable album. It’s just as emotionally raw and compelling as Benji, only with a big fat sad ending instead.

I’d like to think that some of it is just Josh playing a character. Can anyone really be this misanthropic and bitter? It’s a miracle he gets out of bed in the morning. Father John Misty, if you’re reading this, I want to give you a hug.
★★★★☆