What The Heck Is Hyperpop? 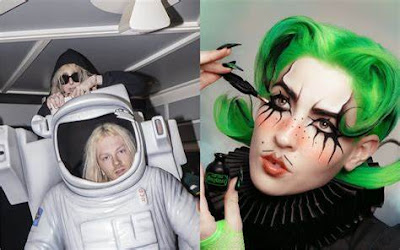 Being the nerdy hipster that I am, I've always been fascinated by obscure music genre labels. Every time a new genre comes along, I immediately throw all my time and energy into researching the shit out of it. Witch house? Ooh yes. Vaporwave? Yes, thank you! Seapunk?? Let’s go! Soundcloud rap??? Give me more!!!

Hyperpop is the latest genre label to take over the internet. It’s already got its own Wikipedia page and there are several Spotify playlists dedicated to it including this one with over 130,000 followers. The term’s use as a genre label can be traced back to this Reddit post from 2016, but there’s usage of the term ‘hyper pop’ well before this – the earliest recorded usage that I could find being on this trance album on Discogs from 2004. However, you could argue that it’s only really become its own distinct music style in the last couple years.

So then, what the heck is hyperpop? The way I see it – it’s everything that’s both cutesy and contrastingly obnoxious about modern pop (e.g. the digitally altered vocals, the loud bass, the gaudy synths) and pushed to newfound extremes.

Artists belonging to A.G. Cook’s record label PC Music paved the way for the genre, creating their own style of sugary bubblegum bass that incorporated cyberculture lyrical themes and pitch-shifted vocals. Today’s hyperpop artists have taken this style and condensed it, while injecting elements of trap and emo into the mix. 100 Gecs’ ‘Money Machine’ might be the most quintessential example of hyperpop:

What do you think of that, huh? The goddamn worst piece of trash you’ve ever heard in your life??? And yet you can’t get the hook out of your head? This was my first reaction. And quite franky, I still haven’t decided whether I love it or loathe it.

Welcome to my hyperpop cooking show. Below are some of the key ingredients that go into making a hyperpop song.

Chipmunked/autotuned vocals: The vocals in hyperpop are often pitched-up or pitch-corrected. Sometimes it’s a hybrid of the two (it's as if Alvin and the Chipmunks and Guy Diamond from Trolls had their own singing baby. JUST PICTURE THEM CREATING THAT BABY).

Turn any sound into a snare: While the SOPHIE-sample-pack metallic snare is often favoured, pretty much any sound can be turned into a snare in hyperpop. A dog’s bark. A window smashing. A toilet flushing. You name it.

Shrill EDM synths: The synths in hyperpop are typically the gaudy and searing synths found in 2010-era EDM. Part euro-pop, part-trance, part electro-house. Maybe with some dubstep squeals thrown in there for good measure.

Genre-blurring and gender-blurring: Although hyperpop has an identifiable sound at its core, artists like 100 Gecs and Dorian Electra like to throw in elements of other genres every once in a while to confuse everyone. This could include anything from a random ska section to a deathcore breakdown. It's not just genre that's being blurred in hyperpop though - there's also a lot of blurring of gender. Many hyperpop artists such as SOPHIE, Dorian Electra and Laura Les of 100 Gecs are transgender and incorporate this theme of gender-fluidity into their lyrics. A more fluid and liberal approach to sexuality is also taken with artists like Brakence and Slayyyter being overtly bisexual.

AD/HD pacing: This is the truly ‘hyper’ part of hyperpop. Most hyperpop songs are under three minutes in length and rapidly change direction with little warning.

What was the first hyperpop song?

Max Tundra’s “Which Song” was the first hyperpop song https://t.co/jcStmqe5Ak

Pitchfork writer Larry Fitzmaurice has credited ‘Which Song’ by Max Tundra as the first hyperpop song (from the 2008 album Parallax Error Beheads You). A few other tracks that could be viewed as early contenders include ‘Surph’ by Rustie (from the 2011 album Glass Swords) and 2013’s ‘Bipp’ by SOPHIE.

It’s difficult to pinpoint one song that triggered the genre to emerge. Before PC Music formed, there were plenty of artists taking pop to parody-like extremes. In fact, you could possibly trace back hyperpop’s origins to the likes of Aqua’s ‘Barbie Doll’ or Eiffel 65’s ‘Blue’.

Is hyperpop about to go mainstream?

Personally, I can’t see artists like 100 Gecs or Dorian Electra obtaining a mainstream appeal – their willingness to throw elements of death metal or happy hardcore into their music completely hampers the accessibility. The lyrics of artists like Slayyyter are meanwhile too sexually explicit for the masses.

However, a tamer side of hyperpop has been emerging lately without the random detours into metal or gabber or the sexually explicit lyrics – one that definitely has the potential to go commercial. Just check out this Charli XCX song with hyperpop production produced by Dylan Brady of 100 Gecs.

Just as many pop artists jumped on the dubstep and trap bandwagons in the early '10s, it wouldn't surprise me if many pop artists start embracing hyperpop in the next couple years - albeit a watered-down version. Soon it will be on the radio and in the nightclubs and on TV ads. BRACE YOURSELVES, THE HYPERPOP IS COMING!!!