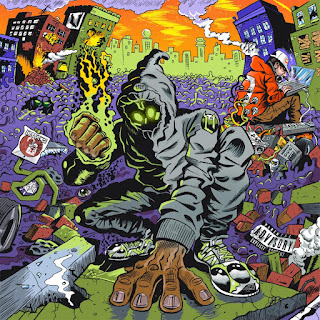 I’ve been following Florida rapper Denzel Curry on this blog since he dropped his debut album Nostalgia 64. Every record he’s released since has been pure fiiire. In fact, I don’t think he has the capacity to drop a bad album (JUST LIKE I DON’T HAVE THE CAPACITY TO WRITE A BAD REVIEW). Even last year’s Zuu – released only a few months after Ta1300 and allegedly entirely freestyled – succeeded in being a satisfying gauntlet of bangers, even if it wasn’t as lyrical.

Having teamed up with producer-of-the-moment Kenny Beats, he’s now released this new EP/visual album UNLOCKED. It was apparently recorded and produced within the space of 24 hours. Pretty impressive stuff, IF THIS ALBUM WASN’T SO AWFUL. WHAT KIND OF DEGENERATE DISSES PIXAR???

Okay, blasphemous Pixar diss aside, there are in fact some killer bars on this album. Even if topically it’s nothing but stream-of-consciousness braggadocio, each track is loaded with pop culture references and witty imagery to make it entertaining. And his already dynamic delivery is now even more varied – showcasing everything from staccato choppy flows to angry DMX-style yelling.

The production courtesy of Kenny Beats is also very fun. It’s chopped-and-screwed boom bap with the occasional punch of trap-flavoured sub-bass. The result sounds like a futuristic version of Madlib (the pitching up and down of Denzel’s voice reminds me a lot of Quasimoto records).

‘DIET_’ showcases the best of what both artists have to offer (and is already likely to appear in my favourite tracks of 2020). Both the frenetic clanging beat and Denzel’s non-stop delivery make for an intense listen. Some of the meanest and most playful bars can be found in this song too including ‘if the game was a tooth, I’m a fucking pair of pliers’ (although this track does also contain the aforementioned garbage Pixar take). ‘Pyro (leak 2019)’ is another favourite track with its spacey beat and one of the best opening lines I’ve heard in a while: ‘my bitch bad like battle rappers that make albums’.

Given it was made in 24 hours, it was never going to be the refined masterpiece that Ta13oo was. There are parts that feel rushed and unfinished – some of the tracks lack hooks and there are parts where Denzel’s bars are simply looped on different tracks to fill space. While some of this is frustrating, a lot of it contributes to the deliberate unfinished aesthetic of the record including the demo-style track titles and the loose structure of the songs.

All in all, it’s on par with Zuu – an album that despite its claims of being freestyled clearly had a little more time put into it. In fact, it’s better than most hip hop albums you’re likely to hear this year, some of which will have taken months to record and produce. It makes you wonder what magic Denzel might come through with when he does finally decide to spend time on an album. Props to Kenny Beats too – he’s able to gel with pretty much any artist he works with and is soon becoming one of my favourite modern beatsmiths.
★★★★☆