Review of 'The Slow Rush' by Tame Impala 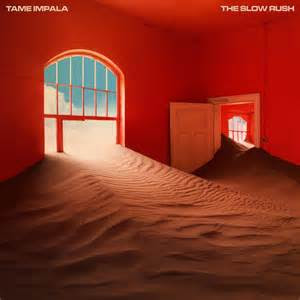 It might be time to face it. Tame Impala aren’t a rock band anymore.


The Slow Rush is an album centred around the passing of time. While some tracks look excitedly towards the future such as ‘Instant Destiny’, others such as ‘It Might Be Time’ anxiously try to come to terms with the fact that the glory days may be far behind.

Part of me feels this way about Tame Impala’s musical trajectory. After all, Tame Impala are no longer a rock band. They left behind the fuzzy guitars on Currents in exchange for glossy synths. In fact, they stopped becoming a ‘band’ on Currents, instead becoming largely a solo project of Kevin Parker (he composed, performed and produced the entire album).

The Slow Rush is yet again pretty much a Kevin Parker solo album and it’s strayed even further from the band’s rock roots. Much of this album is distinctly disco-flavoured, featuring funky bass, shiny pianos and congas. ‘Borderline’ even sounds like it could be an ABBA track.

Some of it is creative and genuinely exciting such as opener ‘One More Year’, which features a warped vocal sample repeated over an Orbital-esque house beat and bassline. And then there’s ‘It Might Be Time’ – my favourite track of 2019 – which is a frenetic mix of Supertramp keys, Kill Bill sirens and industrial percussion. It offers a glimpse of where Kevin could go in the future.

However, some of it is just isn’t as hard-hitting as previous Tame Impala material. Even though Currents did away with the fuzzy guitars, it still had a lot of catchy and lively songs. This isn’t as much the case with The Slow Rush. On top of this, the signature psychedelic effects feel more subdued and Kevin’s vocals are now almost entirely falsettos (personally I think he sounds better when he’s doing his mid-range John Lennon impersonation).

Fortunately, the lyrics redeem this album. In fact, they turn what could have been a mediocre album into something quite fantastic. ‘Posthumous Forgiveness’ is one example of this – Kevin contemplates the passing of time since his father’s death, switching from resentment to a longing for him to still be here. The lyrics aren’t particularly complex, but Kevin knows how to inject enough emotion into them to make them strike a chord.

So Tame Impala are now a disco act with great lyrics. A lot of OG Tame Impala fans are likely unhappy with this direction, but I've come to terms with it. It could have had more of the infectious song-writing of Currents. At the same time, the tracks that do stand out (e.g. 'One More Year', 'Posthumous Forgiveness', 'It Might Be Time') are phenomenal.
★★★★☆