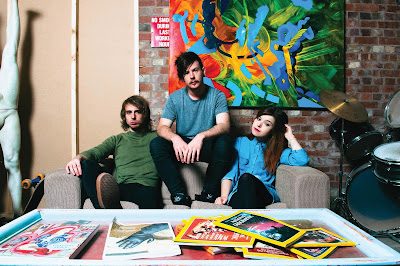 They’re a self-proclaimed ‘twisted grunge-garage trio’ from Manchester. Their latest EP ‘Brainless’ is a tasty raw slab of angst, made up of fuzzy guitars, angry percussion and some gorgeously moody hooks including ‘I hope my head don’t fall out’ and ‘I’ll let you have a piece of my mind’ (dismantling of heads seems to be a theme, hence the EP title I guess).


A couple weeks ago, I featured a track of theirs titled ‘Give it Your Worst’ on this blog. Utterly infatuated, I decided to stalk the band down and interrogate them with questions about gig stories, TV ads and, as always, pizza.

First off, if your band was a pizza what toppings would it have?

Chris: Well it wouldn't have cheese, so it wouldn't be that great hahaha. It would definitely have onion, cos onions have layers innit. The choruses would be thick chunks of salami whilst the verses would be anchovies.

Josh: Nah, one topping. KFC. Our band and the colonel have a very healthy relationship and we have every intention of keeping it that way.

Jen: I agree, we trust in the colonel and onions are disgusting.

How did you three meet?

Josh: Well Chris and I grew up in the same hometown and had mutual friends in various bands together when growing up. So even though we were aware of each other, we weren’t actually mates until a messy night in the pub happened.

Jen: I made friends with some of Chris’s friends when I moved to Manchester, then we ended up doing open mic nights and seeing each other around the place. Chris then introduced me to Josh.

Chris: Yeah I guess we were all friends of friends initially, then gradually we ended up deciding to start a band.

'Give it Your Worst’ is a phenomenal song. I can’t tell if the lyrics are brilliantly defeatist or brilliantly positive. Was this intentional?

Jen: The initial idea of ‘Give it Your Worst’ came from watching someone very optimistic going through something truly terrible. So I suppose it’s both of those things in a way. It sucks when you’re too aware of time passing - you know that feeling on summer holiday where it’s like you regret every minute that’s passed because you should have made more of an effort to have fun? No one likes regretting lost time. We worked on the lyrics together though…

Chris: I’m personally fascinated by the apparent dichotomy of life, people tend to think that if you're not one thing, you’re another. Like, if you're not happy then you must be sad. I've noticed in myself and others how their opinion of things can change so drastically just because of the mood they're currently in - so I suppose the lyrics play with that notion of optimism and pessimism. It’s a theme that’s become a big influence.

Where did you film the music video? I’m loving the fish-eye lens by the way. And the groovy shades!

Chris: Manchester's northern quarter. You can say what you like about it being full of hipsters or whatever but it is a our spiritual home.

Jen: Haha, it’s around Sacha’s hotel. We always wondered what it was like inside so filming the video there killed two birds with one stone. I want to go back for their steak night (think it’s on a Wednesday?) and to do karaoke.

Josh: The décor in there is hilarious, its worth going just for the cringe! The fish eye lens is just a little phone accessory.

Manchester has always had a pretty decent music scene. Any local acts right now besides yourself that you think people need to know about?

Chris: Flesh and The Hyena Kill.

Josh: Agreed - you need to listen to Hyena Kill; they’ve just released one of the best albums of the year in my opinion, I’m so stoked for them. Also Horsebeach are sounding particularly fresh too – worth checking them out for sure.

Jen: I really like the sound of Thing - who we’ve actually just booked a big Manchester show with in November alongside Horsebeach and Narcs (cough cough!). Narcs also have a sweet new album out which you need to check out right now. Then look out for Mums’ new album which is going to blow your face off in the Autumn too.

What are False Advertising gigs like? Any funny gig stories?

Chris: It's basically all three of us trying desperately not to fuck up. There are many but Jen walking onstage without her guitar and having to run off backstage to get it sticks out as a corker.

Jen: They can be confusing as Chris and I swap instruments mid-way through the set. Sometimes people think we’re two different bands I think.

On a vaguely related note regarding your band name, let’s talk about advertising. Favorite and least favorite TV ad of all time?

Josh: Favorite ad? Hmm not sure if it’s the best, but the FIRST advert ever I remember was when I was 3 for Lucky Ducks . I just remember it being the first time I ever saw something and realized it was something that was meant for ME!. I never got it though... I sadly, was not a Lucky Duck :’(
Least Favorite? Probs lucky ducks because I never got it.

Jen: Favourite, probably the road crossing one with the hedgehogs where they sing about being King of the Road. Classic. Also, it’s not strictly TV but the recent House of Cards campaign was on point.
Worst, at the moment - 'I see you baby, chicken madras’. Oh god.

Chris: I always liked the Levis one where they were running through walls but lets face it most are bad - I hate being advertised to. If I want something I’ll research it and then buy it.

What does the future hold for False Advertising?

Jen: Well seeing as we released our album and EP in quick succession (it’s not even been a year yet since our self-titled album came out!). The immediate plan is to gig as much as possible throughout the remainder of 2016. We are running out of singles to release though, so we’re definitely looking ahead to making a killer next record which will obviously change the world.

Josh: We’re all really keen to progress into a bigger place with our next record. We want to push ourselves to do everything better, musicianship, feel song-craft etc. But without losing the core character that makes us sound like us.

Chris: We’d be lying if we said we’re not ambitious.