Review of 'You Will Never Be One of Us' by Nails 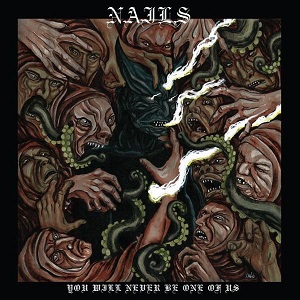 
Californian powerviolence platoon Nails don't want to comfort you. Their aim is to make you feel as downright uncomfortable as possible, sonically and lyrically. In the best possible way of course.

Following the band's two previous brutal releases, You Will Never Be One Of Us somehow manages to surpass and be even more brutal - transporting the listener through an angry vortex of blast beats, slam riffs, dissonant Slayer-esque guitar solos and barked inhuman vocals, each track separated by barely a split-second’s breathing space, hurling the listener from one song to the next like a ragdoll. Non-metal fans will be hammering the mute button faster than a whack-a-mole machine. Most metal fans will be trying their hardest not to flinch under the ten ton guitar tone. Nails aren’t for pussies.

That said, they're not a joke band either set on being extreme to the point of being unlistenable (see Last Days of Humanity) - they understand the importance of dynamics. The aggression may be permanently jammed in sixth gear for the entirety of the record, but the pacing isn't, Nails knowing when to counter breakneck speed with headbangable grooves. The fact that most of the songs average one minute certainly makes them more digestible. However, the group go out of their way to prove that they can also do longer songs when they so desire, eight minute closer being the perfect example switching sonic schizophrenia for a slow and suspenseful progression of sludgy riffs.

A few more playful touches like the Gojira-esque pick slides and feedback usage as found on 'They Come Crawling' might have made for an even more fun album. Even so, You Will Never Be One of Us is quite the thrill ride.
★★★★☆