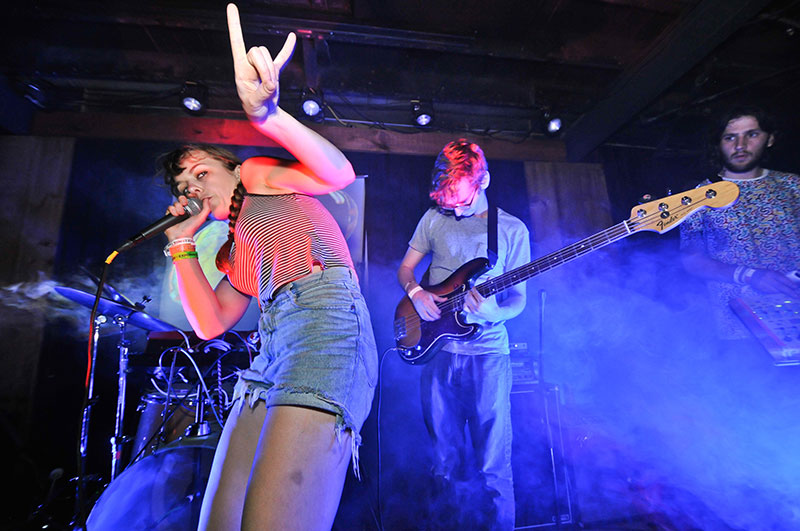 More new music from the best blog in the universe. Branded fidget spinners and a partnership with Google coming soon.

Looking for something to listen to before you go to sleep? How about this new single from avant-garde funk/rock freaks Guerilla Toss, which lyrically ponders what it must feel like to die: ‘Will there be a warning/ when the clock stops moving?/ Will you have just 60 seconds?/ Will you find it boring?’ Continuing in the vein of their last single ‘The String Game’, this carnivalesque speedball remains experimental whilst also sounding like an actual song (unlike their early noisy noodling). In fact, some of the passages in this song are actually quite pretty - which is new for Guerilla Toss.


I’ve got no idea what these dudes are singing about. Hopefully something menacing given those doomy hellacious guitars, but they could be singing instructions for baking cupcakes for all I know. It sounds like Latin (the band are from Tokyo, but it doesn’t sound like Japanese), resulting in the effect of Gregorian chanting over ominous metal riffs. For the record, Boris don’t actually like to be termed a ‘metal band’, but I’m not buying it - if this isn’t metal then the pope’s not a catholic and I’m a sane human being.


Moving on from heavy subject matter and heavy guitars, this new airy instrumental offers a much more drowsy and chilled out vibe for those that might want something to kick back to in the evening sun. It’s jazzy pianos and horns ride a scuffling beat, topped with some hazy Japanese vocal sampling that transports the listener to foreign lands. I thought the producer might be Japanese, but he’s in fact from Dublin. Everyone’s trying out different languages this week.

Music this feelgood should come with an adult warning. In fact, I wouldn’t be surprised if you could find a CD of this in the toy section of Ann Summers. It’s got all the sparkle of a Michael Jackson hit with 2017 production. And this Oktavian dude, whoever the hell he is, has a phenomenal voice.

Drake’s vital signs need to be checked because he sounds dead here and the beat may as well be ‘One Dance’ diluted.

The fuzzy guitars have gone, replaced by Rom-com-trailer strings and a chorus that wants to sound yearnful, but isn’t.
Posted by Alasdair Kennedy at 10:21:00
Email ThisBlogThis!Share to TwitterShare to FacebookShare to Pinterest
Newer Post Older Post Home
Follow @AlasdairKenned1