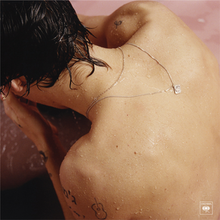 This is the kind of music sixty-year old washed-up rock stars produce. Okay, maybe not 'washed up', but certainly 'past one's prime'. It isn't bad. In fact, some of it’s actually rather good. ‘Carolina’ is a Steve Miller Band-esque jam complete with catchy la-la-las and some impassioned vocals. And ‘Sign of the Times’, as difficult as it is to escape from on the radio, is a big grand ballad with a lovely ascending guitar slide right before the chorus. When it comes to the sound, only ‘Two Ghosts’ takes things to boring Bryan Adams B-side level. The rest are well-produced, well-sung tunes.

That said, there’s a problem with the lyrics – they’re too mature for the 23 year old Harry Styles. He describes relationships as if looking back at a faded Polaroid through reading glasses. Combined with this lack of youth, he’s not really singing anything we haven't heard before, other than on ‘Sign Of The Times’ which is a powerful if not conveniently up-for-interpretation ballad of the times. ‘From the Dining Table’ is an intimate tale of heartbreak that also has it's moment of true beauty – it’s just a shame he ruins the sensitive mood at the beginning with a line about having a sad wank.


Having previously sung to an exclusive audience of young girls, this mature self-titled debut doesn’t seem like the wisest marketing move. But perhaps that’s what makes this album a little charming – it’s not the commercial trite we’re used to. Zayn, Liam, Pedro and the other member all seem to have left 1D for equally poppy ventures. Whilst this is hardly experimental, it’s a lot more alternative and risky. And whilst he did get help, Harry has songwriting credits on every song showing that there’s a little more authenticity going on here.
★★★☆☆