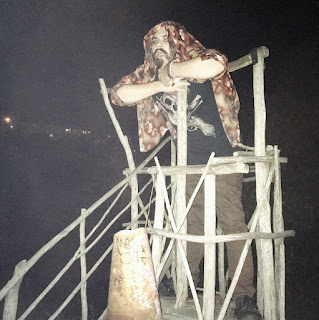 He’s a Latino DIY noise-rapper from California who self-describes himself on his Bandcamp page as ‘the last son of Krypton and the patron saint of blast-out rap’.

Whilst there are lots of rappers out there currently barking over noisy beats, DGA’s idiosyncratic style is totally his own. His self-produced beats comprise of murky samples and distorted drums, but carry a mood more similar to extreme metal than trap rap. His bars meanwhile are a mixture of punky sociopolitical commentary and grungy personal anguish, whilst others are comically berserk. Take 'Fuego Sus', which sees the rapper uttering lines like ‘Hold my Prozac, let me go bust a nut on my soul’, before breaking into a dark interpolation of the Cha Cha slide. You can stream his latest album Fuego Sus below.

Eager to get to know this eccentric rapper, I decided to arrange this interview and ask lots of ridiculous questions about pizza and what it would be like to wake up as Ariana Grande.

If DGA was a pizza, what toppings would it have?

My concept of gringo is pretty specific but maybe Johnny Cash? But he’s quite dead. Tom Hardy is DGA’s dream boy so maybe him. BUT - the main point is that I don’t have much competition because - you heard it here first - white people suck! :)

I’m loving your noisy and raw production style. Who are your influences production-wise?

Summing this kind of thing up accurately is a terrifying task because what if I say the wrong thing? No no no, better to say nothing.  (Guerilla Toss, Death Grips, and everything El-P produces are some noisy shit)

There’s some incredible sampling on your album Fuego Sus. Where do you find your samples?

My samples come from a lot of everchanging sources but the mainstay are my friends’ music and demos, with permission of course.  All my best stuff comes from them.

Some of your lyrics are very dark. How personal are your lyrics? Or is more of a case of trying to create a mood?

My lyrics are 100 percent hella personal but I’m mentally unhealthy so their delusionally dramatic darkness is more from that than reality.  Also I just say sicke shit so people can get boo-boos on the edge.

I would be perfect.  I wouldn’t have to do anything except be Ariana Grande.  Everything would be A okay.  I would continue to layer sarcasm with continually less meaning!

You’re trapped on a desert island and can only bring three personal items (let’s say, you’ve already got food and the bare essentials to survive). What three items do you bring?

You have to share your desert island experience with one of the following people – Donald Trump, Logan Paul or MC Ride? They each have rabies for some reason. Who do you choose?

For the sake of brevity - Stefan can get it.

I’ve been listening to King Krule’s 2017 album The OOZ a shitton.  Bay area slaps.  Indigenous Mexican music.  Folksy cowboy music.  Grindcore/Breakcore.  Those are just some interesting maybe unique things.  I don’t keep up to date with music very well.  A strange album I recommend is Touchy by Luie Luie.  Its very uncomfortable but I love it - “I made these recordings all by myself!”

What does the future hold for DGA?

A lot a lot a lot of hard work to improve and make something I can call dope without hesitation.  I’m hoping to make a lot more music videos since I loved making the video for “Stitched Up” and for better or worse I made exactly what I pictured.  I’ll say there are a lot of singles coming up because if I tell people there are then there will be.  When I drop another album I promise it will be good or your free download back.  Much love, kiss kiss.