Double Review: 'Year of the Snitch' by Death Grips and 'Oil of Every Pearl's Un-insides' by SOPHIE 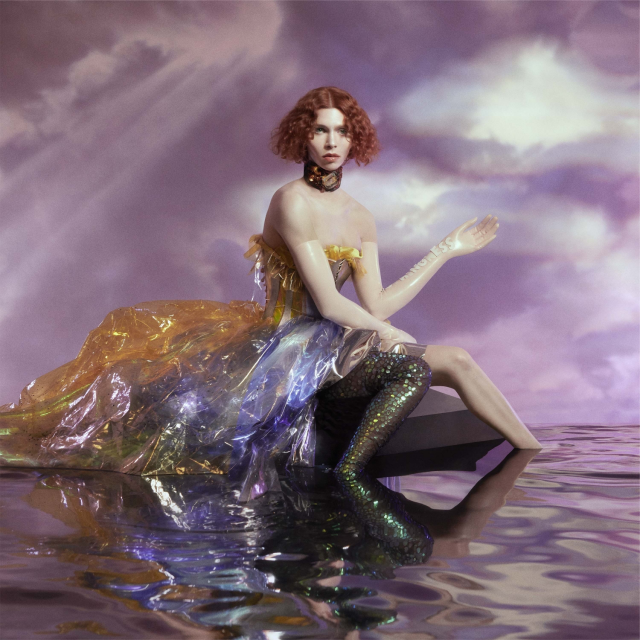 Together they’re two of the most forward-thinking artists making music right now – although some people may just see them as a bunch of arty-farty noisemakers. Personally, I’ve always loved their unbridled experimentalism, even if tracks like ‘Hot Head’ and ‘L.O.V.E’ teetered on my threshold. For the most part, beneath the digitally altered vocals and distorted synth screeches, both artists have always carried a mean sense of rhythm – something that’s always held their unconventional songs together. In fact, Death Grips’ last album Bottomless Pit was full of head-bobbing grooves, whilst SOPHIE’s debut LP Product was a gauntlet of frenetic bangers that similarly made you want to move.

But now, both artists have decided to sacrifice even their sense of groove. Have they overstepped the line and devolved into self-indulgent noodling? Or are they still masters of organised chaos?

Death Grips’ Year Of The Snitch was the first of the two albums that I listened to and the first thing that struck me was how little hip hop influence was left and how much more rock influence there is. In fact, you could argue Death Grips are pretty much a rock band at this point. Many of the tracks are accompanied by satisfying guitar riffs – ‘Black Paint’ might be one of Death Grip’s best tracks to date with a sludgy Melvins-like riff driving it along. Much of the percussion is live drumming rather than digital beats, courtesy of long-time member Zach Hill, further adding to the rock sound. As for MC Ride’s barked vocals, they’ve always seemed closer to hardcore punk chanting than rapping anyway, and here they’re more punky than ever.

Whilst there are still some rhythmic anthems such as driving opener ‘Death Grips is Online’ and poppy misfit ‘Streaky’, much of the album is messier and more chaotic than its predecessors. ‘The Horn Section’ is essentially a drum solo with some glitchy synths layered on top, whilst ‘Shitshow’ layers speedy yelling over blast beats. Along with its rock flavourings, much of it comes across like a prog rock record – especially carnivalesque ‘The Fear’.

The jilted rhythms are just another attempt by Death Grips to be as extreme and ‘noided’ as possible. Given the lyrics are so deliberately garbled and the sounds are so abrasive, there’s very little cohesion left to grip onto. Fortunately, Death Grips do seem to have compensated this with a little more humour, mocking how absurd they’ve become with ‘Shitshow’ and closing track ‘Disappointed’. And whilst the lyrics are still very much dark (many of the tracks have Satanic references and themes of death), there are less tritones and eerie sounds in their music, substituted with a more bouncy demented vibe. Repeat listens definitely make it more digestible – but I’m still having a hard time loving something that’s so grooveless.

Moving on to SOPHIE’s Oil of Every Pearl’s Un-insides, the producer has also taken steps to further reduce her accessibility. Much of her previous tracks have been combinations of noisy and cutesy such as ‘Lemonade’ and ‘Hard’, but now she’s divided the two sounds up. The songs are either bright, atmospheric tunes or bludgeoning bangers – only on closer ‘Whole New World/Pretend World’ are the two allowed to meet (and the track title even seems to divide them into two parts).

SOPHIE’s dark and industrial persona is the one I love the most  - singles ‘Ponyboy’ and ‘Faceshopping’ tap into this side. ‘Ponyboy’ is sex dungeon music with bass blasts that ring out like gunshots, whilst ‘Faceshopping’ covers the topic of materialism to the accompaniment of signature metallic screeches.

I’m not quite as big a fan of her softer side – ‘It’s Okay To Cry’ serves as a soppy poppy opener that does nothing for me. Other than being a bit mushy, part of the reason these tracks don’t work for me is that SOPHIE has stripped away most of the percussion. She’s done this on a previous song ‘Just Like You Never Said Goodbye’, but now multiple songs have no percussion, seemingly building up without a drop, leading them to feel almost unfinished. Obviously, this is a deliberate choice to do away with the EDM cliché of a ‘drop’ and push electronic music forward, but it makes a song like ‘Is It Cold In The Water?’ feel like a load of unresolved tension. ‘Pretending’ gets away with it as it’s pretty much a time-stretched ambient track (and a thrilling one at that), but ‘It’s Okay To Cry’ doesn’t. Even harder track ‘Not Okay’ is sorely missing some cymbals and snares (along with being criminally short).

Of course, perhaps the aim of having less percussion and less danceabilty is to simply to reinforce the feeling of cold artificiality that SOPHIE seems to be celebrating all over this album. Not only are much of the track titles direct references to artificiality (e.g. ‘Pretending’, ‘Immaterial’ and ‘Whole New World/Pretend New World’), but the lyrics are also centred around themes of fakeness such as the clever materialistic wordplay on ‘Faceshopping’ or the identity crisis that is 'Immaterial'. 'It's Not Okay' and 'It's Okay To Cry' could be references to faking emotions. There's even the question of SOPHIE's gender - given that she is a transgender artist, perhaps she's also alluding to the artificiality of identity in this respect. And of course there's the music itself, built from scratch out of waveforms rather than using preset sounds to sound as plastic as possible. Perhaps this time around she decided percussion was too artificial to have its place in this album. Something that is danceable is too human.

As on Death Grips’ Year of the Snitch, a lack of groove is also a deliberate choice to push sonic boundaries. From an objective standpoint, both albums achieve what they set out to do – they’re adventurous and intentionally challenging. The likes of ‘Black Paint’ and ‘Ponyboy’ have enough immediacy to give these albums some replay value and I think both albums have great themes to pick apart, but only time will tell if I can grow to love the use of unrhythmic percussion – in the case of Death Grips it’s too busy, whilst in the case of SOPHIE it’s too bare.