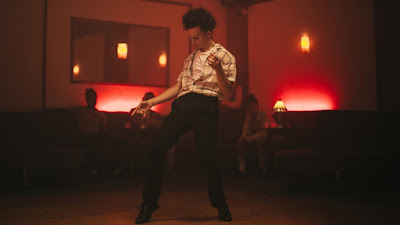 This new Jungle music video is a lot of fun.

Jungle deliver this slick new neo-disco tune, set to a hypnotically groovy bassline and topped with some Earth, Wind And Fire style vocals. The music video that accompanies it is insane, featuring one of the most captivating dance choreographies I’ve seen in a music video for a while. Julia, I hope you called (someone explain the cryptic message at the end to me?!).

This lo-fi house tune sounds like a bad quality MP3 rip and I think that’s an intentional stylistic choice. In fact, that tinny off-beat hi-hat almost has a nostalgic quality to it. I never thought the day would come when I’d miss those crappy Limewire downloads, but given that warped vinyl and scratched CDs have already given birth to popular musical aesthetics, I guess it was only a matter of time.

‘Where Do I Begin?’ – MysDiggi

The title of this track says it all – there’s so much cool stuff going on in this track that I don’t know where to start. Over a deliciously jazzy beat produced by K3ith Price, seasoned UK rapper MysDiggi (FKA Mystro) delivers some smooth bars packed with vivid poetry. The track comes off of his latest album Tip Of Da Mysberg 3 available to stream here.

Blackpool band Oceans over Alderaan describe their sound as ‘atmospheric doom pop’. It’s a spellbinding mixture of effects-slathered guitars and reverb-immersed vocals, featuring lots of creative chord sequences and drum rhythms. The video may have been produced on a shoestring, but the quality of the music production makes up for it. The band name meanwhile is a touching tribute to Princess Leia’s homeworld.

I can’t tell if those machine gun sounds are synths or guitars, but they made me jump out my seat all the same. Congratulations Health - it’s been so long since a song jump-scared me. This is my first exposure to these LA noise-rockers and my initial impression is that they sound like Justin-Bieber-meets-Nine-Inch-Nails (I’ve probably angered a few Health fans by saying that). The soft vocals don’t quite fit the aggressive beat, but this kind of adds to the unsettling nature of it all. It’s definitely left me curious to hear more.

Boasting about having lots of money has to be the most tedious rap topic. Also, since when was Ariana Grande a rapper? I hope this is just a one-off thing, as I really did enjoy the mature direction she was taking on Sweetener. Her sexy outfits in the video are appreciated though, even if the whole video is very pink.