Review of 'Is He Real?' by IDK 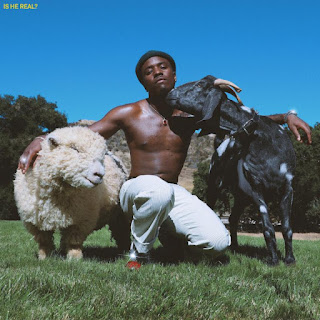 Philosophers, scientists and theorists have long debated the question: Is God real? Now, Maryland rapper IDK has decided to weigh in with his view on the matter.

Who is IDK? Honest answer: IDK. I only listened to this record because the album cover looked funny. According to his Wikipedia Page, his name actually stands for Ignorantly Delivering Knowledge (which perfectly sums up my style of reviewing, while also perfectly summing up the problem with this album).

Is He Real? starts with a seemingly innocent skit of a kid describing what he thinks heaven is like, which involves going through the pearly gates and joining a long queue around the mountain. We then get to the front of the queue only for our cute narrator to suddenly adopt a deep voice and brusquely declare ‘you wake up from your dream because God isn’t fucking real!’.

Pretty provocative stuff! I can just imagine the hundreds of Christian listeners around the world having a heart attack. Even as someone who isn’t religious, I was sweating at the prospect of what was going to come next. Was this going to be an entire album fiercely denouncing the existence of God?

Not exactly. In fact, for the next few tracks, IDK decides to sweep the question of ‘is he real?’ under the rug, choosing instead to rap about gang culture and sex. Admittedly, he does try to keep it topical by lacing in lots of religious symbolism - ‘42 Hundred Choices’ is reference to how many religions there are in the world and ‘24’ is a reference to a bible verse – but even so, I felt clickbaited. I wanted a hip hop album questioning God’s existence. If I wanted an album about gang culture or sex, well… I may as well have listened to any other rap album.

Despite not addressing the central topic, IDK is a distractingly talented and creative musician, which meant that I did still find myself enjoying the tracks that followed. Not only can he rap like Kanye, but he can sing like Frank Ocean. The beats are all dynamic and he adapts to each one like a chameleon – he sounds bouncy over the spiky piano of ‘24’ and he sounds contrastingly smooth over the Nandos-flavoured beat of ‘December’.

By the time IDK finally returns to the topic of ‘is God real?’, you almost wish he hadn’t bothered. IDK shoehorns in an interview with Tyler, the Creator about his atheist views – which isn’t particularly insightful and only serves to interrupt the fun momentum of the album. ‘European Skies’ feels like a much better attempt to address the question, which sees IDK running through the contradictions in the Bible and seemingly wanting to believe in God. The fact that it’s accompanied by beautifully cavernous synths and rapped so well also makes it enjoyable as a song. But immediately after, IDK takes a detour into a song about the media ‘No Cable’, abandoning the theme yet again.

Last track ‘Julia’ may well be the best track on the record and equally the most frustrating because it offers a glimpse of what the album could have been. We learn about the tragic death of IDK’s mother, which has clearly fuelled him to have doubts in his religion. The track almost brought a tear to my eye. But then he ruins it all by trying to bring the album’s ‘Is he real?’ theme too a nonsensical conclusion, going into some strange colour analogy before summing up ‘how can we say there is no God?’.

The closer made me wish that this was an album centred around IDK’s personal struggles and not God. The question of ‘Is he real’ wants to be the big pull factor of this album, but it ended up pushing me away by being shoddily executed. IDK is an incredible rapper with fantastic production behind him and he clearly has the potential to write poignant personal lyrics. He is not a philosopher – in fact, I doubt any rapper could take on this topic with the nuance that it deserves.
★★★☆☆