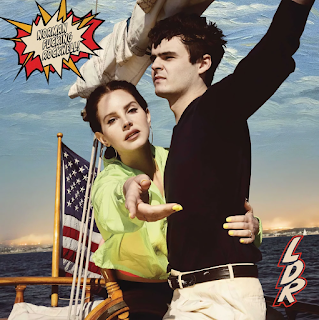 Lana Del Fucking Rey is back with a new fucking album.

Love it or hate it, Lana Del Rey’s sound is undeniably unique. She’s spent the last decade playing the dead-eyed female victim from a noir movie, using depressing ballads to detail abusive relationships with jerks in which she yo-yos between heartbreak and Stockholm syndrome. You can guarantee there will be sad pianos, sad strings and generous servings of reverb. There’s also a high likelihood that the f-bomb count will be higher than a Scorcese movie (because Lana Del Rey wants you to know she’s really fucking tired of it all).

That said, she’s not entirely predictable. Every album has seen a clear progression, from all-out sadgirl on Ultraviolence to smoky-voiced Bond girl on Honeymoon to modern tragic on Lust For Life. Personally, I couldn’t stand her monotone bleating on Ultraviolence. But in the albums since then she’s become more dynamic and exciting. Her last album in particular saw her experimenting with her voice, trying new styles of production, getting socio-political and even embracing a sense of optimism.

Normal Fucking Rockwell! sets itself up to be an even more dynamic and exciting album. In fact, after hearing the first few tracks, I thought this may even be album of the year material. The spritelier tone of the pianos and the amusing lyrics in the opening title track reminded me of Fiona Apple. ‘Venice Bitch’ meanwhile was an exciting detour in psychedelic rock (even if it doesn’t quite know when to end) and cover ‘Doin Time’ is an upbeat summer jam that’s a complete turnaround from the artist that gave us ‘Summertime Sadness’.

It’s a shame that things take a nose-dive in the second half. The production gradually becomes barer – consisting of dime-a-dozen piano chords and the occasional synth swell. ‘Love Song’ is convincingly heartfelt and intimate because of this. However, the later tracks lack this conviction and end up sounding like dreary leftovers from Ultraviolence. This dreariness peaks at ‘California’, which not only sports the most cliched title of all time, but also contains numerous cliched lines about coming back to America and lying in my arms (probably a deliberate attempt to invoke some Americana nostalgia, but it does nothing for me).

Lana’s varied vocal tone is probably the only element of this album that remains consistently exciting throughout, preventing some of the latter tracks from being total anaesthesia. At times, she lets her vocals soar and other times she reels them back to a spoken-word whisper. I also love the creative inflections in the choruses, such as the stutter of ‘bart-t-tender’ and Bowie-like breathy delivery ‘I’m your man’. The monotone bleating of her early days is kept to a minimum.