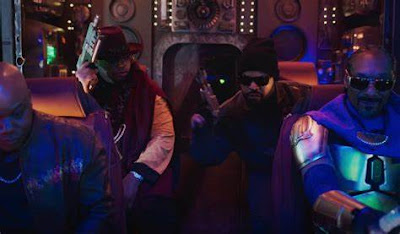 West Coast hip hop legends Snoop Dogg, Ice Cube, E-40 and Too Short have recently formed a new supergroup called Mount Westmore. ‘Big Subwoofer’ is their first single together - and it’s a lot of fun! It mixes old-skool boastful bars with modern bass-heavy production (I would love to hear this beat through a big subwoofer). The video meanwhile takes place on the planet of ‘Snoopiter’ and features a three-titted alien chick and a dog in a spacesuit (if that doesn’t make your want to watch the video, I don’t know what will.).

Run-For-Cover-signed Florida duo LANNDS have dropped this new dreamy electropop track ‘In The Garden’. The production reminds me a lot of Washed Up’s ‘Feel It All Around’ –the radiant synths and steady bass riff are entrancing. Vocalist Rania Woodard’s angelic singing is also hypnotic.

At first, I thought this was going to be a fairly conventional lo-fi indie song. I was not expecting the drums to be so ferocious. Melodically it has a sugary psychedelic feel to it, but rhythmically it’s like being caught in a violent brawl. I’m looking forward to hearing more chaotic music from this Philly band.

This jittery synthpop song is the work of New York producer/singer Mindchatter. The lyrics sound like they were written by a malfunctioning robot that has accidentally become sentient. The backdrop of bouncy electronic sounds and metallic vocal effects also have a semi-organic semi-robotic feel to them.

‘End of the World’ – Fatherson

My social media feed has been full of doom and gloom headlines recently. ‘It’s not the end of the world’ is definitely the anthemic hook I needed to cheer me up. This is the Glasgow trio’s first single in three years. It’s less guitar-focused than their early stuff, bringing in more synths and pianos. Personally, I love the epic feel of it all (especially that dreamy wall-of-sound section towards the end).

Every time I hear that ‘eeeeeeeeeeeee…’ chorus I keep expecting it to break into ‘In the Jungle the Mighty Jungle’.