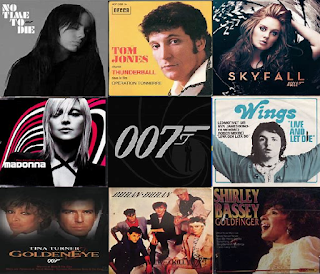 I’ve always been a huge James Bond fan. With the new Bond movie No Time To Die out in cinemas, I thought I’d take on the challenge of ranking every Bond theme ever made. All 24 of them.

24? But haven’t there been 25 Bond movies? Yes, but Dr. No, the first Bond film, technically never had a unique theme song dedicated to it – it simply contained the signature ‘James Bond theme’, which appears in all the movies, and therefore doesn't count.

I’ve also left 'Never Say Never Again' off this list because that wasn’t an ‘official’ Bond movie. I can’t include that here, because that would start a riot. The diehard Bond fanatics would be at my door with pitchforks yelling ‘tHaT’s NoT cAnOn!!!’ while ripping me limb from limb.

Ranking these theme songs took a lot longer than I expected. I've spent the last few weeks listening and relistening to all 24 songs. Below is my final rankings. There are lots of embedded Youtube videos here so I apologise if this post takes 10 years to load.

With its invisible cars and satellite laserbeams, Die Another Day may well be the daftest Bond movie of them all – and it’s got a fittingly daft theme song. Why does Madonna sound like a robot? And what is going on with the lyrics: ‘Sigmund Freud, analyse this!’. It’s hideous.

This is music for a romantic kiss scene on a beach. Far too soppy for a Bond movie.

I quite like the energy of this song, even if the innuendos are a bit heavy-handed: ‘who will he bang/ we will see!’. Apparently, Alice Cooper was originally asked to sing the theme tune (would that have turned out better, or more disastrous?).

This smashing power ballad from Carly Simon is the first song not to be titled after the movie (although she does manage to skilfully work the title into the lyrics). Perhaps its biggest drawback is that it doesn’t really sound like a Bond theme at all.

In order to match the gritty performance of Daniel Craig, the Bond franchise hired Chris Cornell to deliver this grittier rock-flavoured score. I love Chris Cornell, but I feel like this track lacks dynamics. Still a million times better than its predecessor ‘Die Another Day’.

Garbage? WHO??? I totally forgot this one existed. The Scottish rock group do a great job of throwing in all the essential Bond theme ingredients including chromatic string melodies and smoky vocals. The 90s spy thriller electronica cheapens it slightly.

‘I’M THE BONNNND GUY!’ *Loopy synth from ‘Bad Guy’ starts playing*. That’s honestly what I expected when I heard Billie Eilish was singing the new Bond theme, but the end product is thankfully a lot more tasteful. The instrumentation’s a bit generic, but Billie’s suspenseful whispered vocals are phenomenal.

One of the few Sam Smith songs that isn’t intolerable. In fact, it’s actually quite decent. I’d even go as far as to say this shit slaps. The way it shifts from loud strings and belting vocals to quiet pianos and delicate falsettos is masterful. Okay, I’m hyping it up a bit too much now. It’s alright.

This one from A-ha is pretty nuts. It’s got orchestral strings and horns, sparkly synths and even some saxophone towards the end. It loses points for the silly chorus: ‘Whoa-oo-oo-ah, the living daylights!!!’. They didn’t even try to craftily work the title in there, did they?

I just listened to this for the first time in years. Despite featuring one of the most bizarre vocal pairings of all time, it’s a badass Bond theme. Jack White and Alicia Keys make a fierce combo – they both give mean vocal performances, and the fuzzy guitars and stabbing pianos sound brilliant together. I’ve already completely forgotten the chorus, but otherwise it’s fantastic.

I was convinced Duran Duran’s groovy synthpop tune was going to be in the top 10, but after listening back to it, I’ve realised those orchestra hits haven’t aged very well. They’re also utterly relentless. It’s like BAM! BABAM! all the way through the song. It is the most danceable Bond theme though.

Of all the Connery-era Bond themes this is probably the least memorable. But the blaring horns and Tom Jones’ charismatic delivery of ‘and it strikes/ like thuuunderbaaaall!’ still make for thrilling, powerful stuff. Fun trivial fact: Johnny Cash was almost chosen to score this film.

Shirley Bassey defined the sound of the 007 movies. This is her most subdued performance of the three movies she helped score, but it still blows most of the other songs on this list out of the water: the strings are gorgeous and the whole song has a tastefully ‘spacey’ feel. If this was made in the 80s, you just know they’d have doused it in sci-fi synthesizers.

‘A License To Kill’ has everything you could want from a bombastic 80s power ballad. Reverb-slathered snare drums. A gargantuan chorus complete with backing vocal harmonies. Even a key change at the end. At the same time, it feels unmistakably like a Bond Theme with those opening chord blasts (even if they do sound a lot like the opening chords to ‘Goldfinger’).

After a 6 year break, the Bond Franchise returned with Goldeneye, accompanied by this explosive soundtrack performed by powerhouse vocalist Tina Turner and written by Bono and the Edge. You could argue that the blaring synth brass sounds a bit tacky now, however the sass and energy of Tina’s vocals make up for it.

This one’s an oldie. From Russia With Love was the second Bond movie and the first to have its own sung theme (the first to have a title sequence with dancing naked ladies). Matt Monro’s Sinatra-like voice and carefully measured delivery keeps you hanging onto each note. I don’t think I realised just how super this song was until I went back and listened to it.

This is the underrated gem of the Bond series. Sheryl Crow's voice is both fragile and incredibly powerful. Just listen to that belter of a chorus! I can’t remember a single scene from the movie, but goddamn, that chorus. Did I mention how good the chorus is?

Aside from maybe Gladys Knight, Adele is the only singer who has been able to recapture the suaveness of Shirley Bassey. It’s easily the best Bond theme to be released in the last 40 years.  I love how the lyrics in the chorus contrast the melody – as she sings ‘let the sky fall’ the melody ascends and yet as she sings ‘we will stand tall’ her voice dips slightly. It’s perfectly designed to put you on edge.

From the sparkly opening instrumentation to the roared closing delivery of ‘foreeeveeeer!’, every part of this track is so well crafted. Shirley Bassey’s voice is able to convey so many emotions as she sings about rejecting men in favour of a love of diamonds – at first she sounds confident and sincere, but as the song continues a sense of loneliness and despair becomes apparent. The most amazing part about this song is that it’s not even Shirley Bassey’s best Bond theme.

OHMSS is the film everyone forgets about. It was the only movie to star George Lazenby as 007 and is the only movie to feature an instrumental theme. Despite the lack of vocals, it still manages to be a  banger. It kicks off with some orchestral stabs and then settles into its iconic descending four note ostinato from which it builds and builds into an epic climax.

‘Live and Let Die’ is an absolute rollercoaster. On first listen, you assume it’s just going to be a soft piano ballad, but then as Paul repeats the words ‘Live and Let Die’ it shifts into an intense racing instrumental section made up of rock guitar and menacing dissonant orchestral strings. And then, if that wasn’t batshit insane enough, it transitions into a reggae section. ALL WITHIN THE FIRST MINUTE AND A HALF.  It’s the Bohemian Rhapsody of Bond themes. It’s like drinking 4 coffees in a row. It makes me want to scale a building or get into a car chase.

2. ‘You Only Live Twice’ – Nancy Sinatra

Nancy Sinatra’s ‘You Only Live Twice’ paved the way for a new breed of Bond Theme, switching out the loud horns and belting vocals for soaring strings and soft vulnerable crooning. It’s one of the few Bond themes that gives me shivers. Those strings are insanely beautiful. I also love the haunting chord progression in the verse, the squeaky electric guitar and the splashes of oriental keys. And then there’s Nancy Sinatra’s precise vocal performance which is both seductive and foreboding like a siren luring sailors to their death.

This track almost never made it into the film. Producer Harry Saltzman hated it, claiming ‘that’s the worst *** song I’ve ever heard’. Fortunately, there wasn’t enough time to replace the song, and so Saltzman reluctantly agreed to keep it in. The result is the most quintessential Bond theme ever written. The opening blaring horns are iconic. They’re so loud they pierce through you. Shirley Bassey gives the best performance of her career, singing her goddamn lungs out (apparently, during the recording of the song, Shirley Bassey almost passed out because she put so much into it). Her delivery for the most part feels deliberately mean and cold, but occasionally turns delicate as when she sings ‘for a golden girl know’s when she kissed her’, giving it a suspense up until its final roared note. Maybe it is a bit of a predictable choice for the number one spot, but it deserves it.