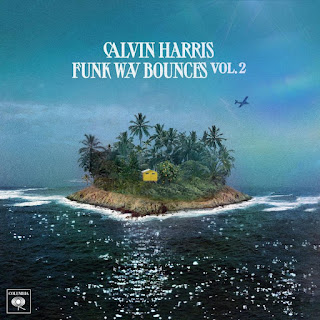 Are we going to get a Vol 3 too? After listening to Funk Wav Bounce Vol 2, I hope not…

When EDM magnate Calvin Harris released Funk Wav Bounces Vol 1 back in 2017, it felt like a refreshing change of direction. Okay, so a disco/funk revival was nothing new at this point – we’d literally just had disco/funk albums from Daft Punk and Mark Ronson. However, compared to 2014’s Motion – an album of robotic house anthems that sounded like they’d been created by an algorithm - Funk Wav Bounces Vol 1 felt so much more fun and organic.

My biggest complaint with Funk Wav Bounces Vol 1 was some of the features. Making up the impressive party of high-profile guest stars were a few trap rappers who sounded completely out of place over the smooth instrumentals. Rappers like Saba, Isaiah Rashad, Vince Staples and Kendrick Lamar would have been a much better choice than the likes of Young Thug, Future and Migos. Still, at least Pharrell, Snoop Dogg, Frank Ocean and Jessie Reyez were there to bring some reliable smoothness.

Five years on, we now have a sequel, Funk Wav Bounces Vol 2. It’s inevitably not as fresh as Vol 1 – not only has Harris stuck to the same sound, but he’s also brought back many of the same guests. On top of this sense of déjà vu, it feels like the disco revival trend has truly been done to death at this point. Everyone from Dua Lipa to Lizzo to Doja Cat to The Weeknd has jumped on the bandwagon in the last five years. Disco fatigue is setting in. It’s 1980 again.

To make matters worse, the quality of song-writing and performances just aren’t as good on Vol 2. ‘Stay With Me’ wants to be the new ‘Feels’ with its triple-star combo of Halsey, Pharrell and Timberlake, but it just isn’t as feelgood or catchy. ‘New Money’ would have meanwhile been the perfect track for a Vince Staples feature – instead we get a verse from 21 Savage that wants to be smooth but just sounds monotonous.

‘New To You’ and ‘Ready Or Not’ are without a doubt the best songs here. The strings on ‘New To You’ sound truly cinematic, Normani’s vocals are gorgeous and even Offset is on top form. Busta Rhyme’s playful delivery on ‘Ready Or Not’ meanwhile puts most of the other guests to shame and the glitzy synth chords remind me of 00s-era Calvin Harris.

Otherwise, there aren’t really any tracks here that I want to return to. Compared to its predecessor, it just hasn’t got the bops. The hooks are lacking and there are still guests like Swae Lee that shouldn't be allowed on a disco beat. Plus Harris just isn't doing anything new. It’s time for him to take off his disco bellbottoms and find a new direction.