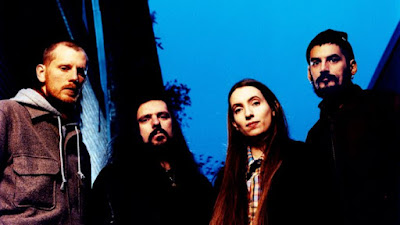 The artwork for Dry Cleaning’s upcoming album makes my skin crawl. I’ve never listened to this band, and so was half-expecting some scuzzy noise rock. I definitely wasn’t expecting smooth vaporwave synths and jazzy clarinet. The spoken word monologue about ‘the dog sledge people’ and ‘sensual Steve’ is pretty much rambling nonsense, and yet I loved every moment of it. Apparently, vocalist Florence Shaw was inspired by ‘phone calls with a friend who was living and working in the arctic’. The result is snippets of a conversation that build an absurd but vivid picture. Within the increasingly busy UK post-punk scene, it feels like these guys have definitely found their own lane.

‘Orange County Punk Rock Legend’ sounds like if Death Grips co-produced a pop punk song. The snotty shout-singing and distorted percussion make for a pretty ugly combo, and yet somehow the sunny guitar riff keeps the track cheery and upbeat. I didn’t understand a single word of the lyrics, however the production does seem cleaner than the toilet bowl production on their previous album Kiss My Super Bowl Ring. The drums and guitar are so crisp I can practically taste them.

This neo-soul song from Toronto artist Jesse Maxwell is centred around the deafening silence that follows a breakup, summed up with the line ‘these walls are silent but they’re outspoken’. It’s got a really cool synth palette (those wobbly synths are particularly fun) and some bubbly digital percussion. The singer is dropping a new album LP2 this month.

‘Be Mine’ is the latest single from jangly indie pop band Boy Pablo. The vocals are a playful mix of English and Spanish (the band are Norwegian by the way) and there’s a fun surprise guitar solo at the end (oops, surprise ruined). Overall, I’m loving the summery poolside vibe #PoolboyPablo.

Drones had some heavy numbers on it. But I don’t recall Muse ever sounding THIS heavy. Those opening guitars sound almost Gojira-like. And did I seriously just hear Matt Bellamy let out a death growl?? The singing is still utterly bombastic and one of the riffs does remind me a little too much Drowning Pool’s ‘Bodies’. But otherwise I love how hard-hitting this track is and how the lyrics don’t seem to quite as on-the-nose with their sociopolitical message.

This verse is lazy even by Lil Pump standards. I got more out of Yo Yo Honey Sing’s rapping, and I don’t even speak Hindi.