Review of 'Kiss My Super Bowl Ring' by The Garden 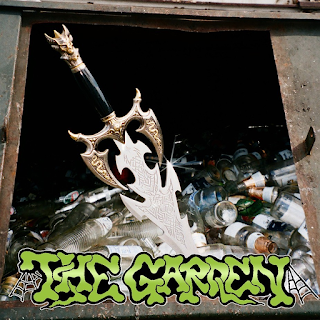 Once you get past the very very very lo-fi production, The Garden’s unique blend of grunge/grindcore/jungle/trap/funk is actually quite thrilling.

The Garden are an experimental rock duo from California, consisting of twin brothers Wyatt and Fletcher Shears. They’ve released three albums previous to Kiss My Super Bowl Ring - none of which I’ve listened to. I had no idea what to expect from my first venture into The Garden. Was I going to dig The Garden? Or, like the album cover, would it be a load of trash?

Grungy opener ‘Clench To Stay Awake’ kicks off the album with some shaky soft singing and twangy guitars that sound like they need tuning. The added shitty digital drums that enter mix make it sound like a bad demo recording (at this point I feared that the album was going to be trash). The track gets more enjoyable once the distorted guitars and real drums come in. However, it was really only after the second track that I understood The Garden’s appeal.

‘A Struggle’ immediately assaults the listener with blast beats and screams, then shifts abruptly into a soft melancholy rock passage, before hurtling the listener back into blast beats and screams - all within the first ten seconds. The Mr-Bungle-esque chaos continues for roughly one minute before the track settles into a cool Fugazi-style bass groove accompanied by glossy synths. At this stage, it became clear that The Garden were not just any other lo-fi rock band, but something far more exciting.

In fact, as the following tracks showcase, they’re only partially a rock band. ‘Sneaky Devil’ is the first of several ventures into angsty drum and bass, ‘AMPM Truck’ is a funky-flavoured track about almost dying while asleep at the wheel and ‘Lurkin’ is almost SoundCloud Rap. Some of the tracks change direction sporadically such as ‘Hit Eject’ which sharply transitions from jungle-rock to trap with fairy harps, while others are tamer and more focused such as catchy title track ‘Kiss My Superbowl Ring’ and headbang-inducing following track ‘A Fool’s Expedition’.

It’s an erratic and slightly messy album, but it’s also very fun. Rock fans might find all the electronica intolerable, while ravers might be turned off by the blast beats and screams, but personally I vibe with it all. Much of it is very obnoxious ('Kiss my super bowl ring' pretty much translates as 'kiss my ass', while the closing track is even titled ‘Please, Fuck Off’), but it equally matches their whole IDGAF-approach to making music. They’re pretty much a guitar-based 100 Gecs, with the sensibility to stay away from annoying auto-tune and crunkcore.

Talking of 100 Gecs, you can blame Dylan Brady for the toilet bowl production on this album. I’m still not the biggest fan of the sloppy mixing and recording, but repeat listens have helped me to appreciate that it’s likely a deliberate aesthetic – much like rock band Washer, but pushed to even sloppier extremes. The production also helps to bring a uniform sound to an otherwise all-over-the-place record. Lo-fi legend and fellow genre-meddler, Ariel Pink (who appears on the album as a guest on 'Lowrider Slug') could probably teach them a thing or two about doing lo-fi correctly. Even if the band were aiming for a trashy sound to match the artwork, there’s still no place for off-key vocals on any album.