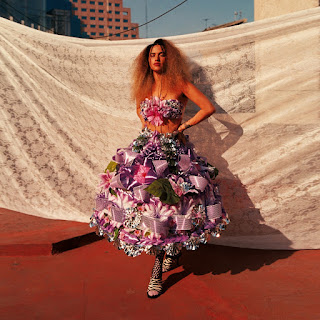 Is Empress Of back to her quirky self?

Lorely Rodriguez (aka Empress Of) used to be a very quirky pop artist. This weirdness was the big appeal for me while listening to her debut album Me, which made my favourite albums of the decade. She followed this up a few years later with Us, which felt decidedly more commercial in flavour. In fact, some of the tracks sounded like they could have been Little Mix singles.

Having decided to no longer use single pronouns as album titles, this new record I’m Your Empress Of is somewhere between Me and Us in musical style – it’s not as experimental as her debut, but it’s not as commercial as her sophomore.

In fact, most of the track settle for a good balance of catchy hooks and off-kilter production. Two of the biggest highlights are vogue-worthy pop house bangers ‘Love Is A Drug’ and ‘Give Me Another Chance’. The most left-field track is closer ‘Awful’, which combines heavenly synths, spacey vocal harmonies and thunderous hits of percussion in the chorus (it’s definitely not an awful track and is in fact my favourite song on the album). The most commercial track is meanwhile ‘Not the One’, in which the autotune and vocal inflections sound reminiscent of Kehlani (it’s definitely not the one and is my least favourite song).

Lyrically, the album doesn’t have the unusual imagery that Me had. In fact, I was disappointed to find out the lyric ‘I love you and all your piss’ on ‘What’s The Point’ was actually ‘I love you, I know you’re pissed’ (loving someone and all their piss is a much more wacky line). Fortunately, the record makes up for this by being Lorely’s most personal album. She tackles the subject of heartbreak again, this time with a deep longing to be loved and ‘touched’ (she sings about wanting to be touched/being touched on almost every track). Vocal recordings of Lorely’s mother are peppered throughout the album, preaching female independence in deliberate contrast to Lorely’s needy lyrics. It perfectly captures the sense of not knowing whether to continue looking for love or to embrace solitude after a series of failed relationships.

All in all, it’s a return to a quirkier sound, even if it’s not as utterly eccentric as Me. If you like your pop deeper than Dua Lipa but not as arty as Grimes, then this probably good middle ground.