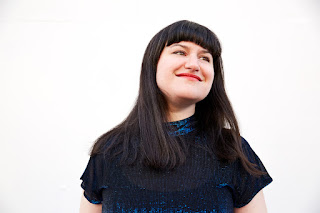 She’s a singer from New York with a unique pop sound that combines infectious hooks and off-kilter production.

Her single ‘Together’ caught my attention last year with it’s catchy chorus and inventive instrumental. In fact, I loved it so much that it made my favourite tracks of 2019.

The singer also released an album titled Stage Life last year (which you can stream below).Written with the help of late producer Sam Mehran, the record contains some equally playful and earworm-filled tunes from moody 80s electro numbers like ‘Disappear’ to fluttering genre-bending numbers like ‘Butterflies’. It’s one of the most fun underground pop albums I’ve heard in a while.

I decided to reach out to Katie for an interview to find out more about her time with Sam Mehran, her upcoming album and the music she’s been listening to. Read on to find out more…


Let’s start with my signature pizza question: If your music was a pizza what toppings would it have?

Mushrooms, because my music brings you into a dream world, and extra cheese because of its cheesy pop catchiness.

‘Together’ was the first song I heard from you and I still think it’s an incredible track! How did you go about creating that song?

Thank you so much! We wrote it to just be a fun, cute but secretly melancholy bop about a guy I was seeing at the time who things were never going to get serious with.  We made it in a day in LA when I went there for the month in Sept ‘17 to finish the album.  It was one of our quickest songs to write actually.  First we recorded the first rough version of the melody, and then I wrote the lyrics. Sometimes I’d write the lyrics without him there but for ‘Together’, he sat around his room reading a book and I would ask for his feedback periodically.  Sam always made the lyrics more clever than I could’ve dreamed up, and ‘Together’ is no exception.

Stage Life is a fantastic album. What was it like working with Sam Mehran?

I really appreciate you saying that about the album and it means a lot that you’re asking about Sam; working with him was of the best things that ever happened to me.  I know, and always knew, how fortunate I was to work with Sam Mehran.  Working with him was being brought into his silly, hilarious, magical world and getting close to maybe the most compassionate and sweet-natured, realest person I ever met. The music happened pretty quickly and easily, always, but was secondary to just being with Sam.  It was always an adventure with him, and he loved to prank. We had the time of our lives exploring LA, or hanging out on his terrace smoking cigs and talking or watching Larry David or our other favorite stupid YouTube clips. I’ll always be grateful for the time I had with Sam, though my heart is still broken.

I’m excited to hear that there’s a new album in the works. What can fans expect?

This is the album Sam and I made just before he passed.  He thought it was our best work.  It’s a darker, more ethereal vibe than the somewhat-more-upbeat Stage Life, more along the lines of the first album Law of Attraction (which was also a collaboration with Zak Mering).  There are six original songs ranging in topic from space and aliens (my favorite subjects) to Trump and the sorry yet maybe hopeful state of world leadership, one cover and one with an instrumental sampling of Mort Garson’s Plantasia.  Like Stage Life, there’s a bit of r&b influence scattered throughout, and some dancey grooves, but also otherworldly pangs.  I still can’t believe that this is the last work Sam and I will make together, but it stands on solid ground as such.  I relied much less heavily on Sam for the writing of this album than the previous two, but it showcases his genius of course. Sam taught me everything I knew about songwriting and got to see me grow more confident with it over the years.  We loved making this music together and connected deeply over it, and I hope that comes through to the listener.

How has lockdown been for you so far?

Lockdown has been a little lonely, but I suppose I was a little lonely before so it’s been alright.  I’m doing my best to turn it into something positive.  Matt Molnar - (of DISOLVE and formerly of Friends) who’s finishing production on the third album before its release later this year - and I have been going back and forth emailing final touches.  I’m also working on building an app for independent musicians that’ll allow for easier discovery for fans and more sources of revenue for artists.  That’s my next dream beyond making music, is the music app.  In other words, I’ve been staying- somewhat- sane by keeping busy.

You list David Bowie, ELO, Lady Gaga, Joe Meek, Beach Boys and Prince as influences on your Facebook bio. If you could name a favourite track from each of them what would it be?

What music have you been listening to recently? Any underground artists that you think the world needs to know about?

I tend to listen to the same songs over and over, and honestly I’ve been obsessed with Grimes’ Miss Anthropocene since its’ singles started coming out. Grimes to me is the perfect combination of ethereal, offbeat but deeply satisfying pop, my favorite combination. As for more underground artists, some of my favorites Shilpa Ray and Ghost Piss both just came out with excellent singles.  Prince Rama’s final EP came out a few months back and is excellent; I can’t wait for lead singer Taraka’s debut solo project. And my former collaborator Zak Mering aka Raw Thrills recently came out with some new material; he’s very prolific and constantly exploring new styles both whimsical and serious.

Finally, what’s your favourite album of the 2010s?

Two come to mind right away and I can’t compare to make a choice: Sky Ferreira’s Night Time, My Time, and Samantha Urbani’s Policies of Power.  It’s true that Policies of Power was also produced by Sam, so you’d think I’d be a bit biased, yes, but I genuinely love the shit out of this album and have listened to the whole thing on repeat more times than would merit a bias.  Samantha and Sam made a pop masterpiece in my book.  And Night Time, My Time is just perfect moody pop sexiness.  I wanna be an alt pop princess like Sky and Samantha someday.