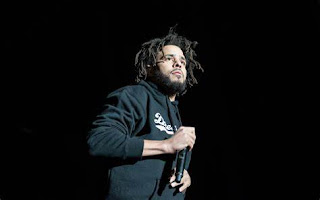 J Cole's 'IQ is average', Cubgod is going to 'save the world' and Belle Delphine is 'back'...

The negative response to this track on Twitter led me to believe that Cole had said something stupidly outrageous like ‘bLaCk lIvEs dOn’T mAtTeR!’ or ‘nOnAmE is A WhOre!!!’, but that clearly isn’t the case. The issue with this track is a little bit more complex and I get why it could come across as an unnecessary attack on Noname. Personally, I think it shows an endearing confessional side to Cole, and that people are missing the moral at the end ‘maybe cause deep down I know I ain’t doing enough’. Cole’s flow is also insane and the singing at the end is gorgeous (that is J Cole singing, right?).

Another BLM-themed track – ‘Lockdown’ sees versatile singer-rapper recounting his experience of the riots over a smooth funky instrumental. In fact, it’s the smoothest and funkiest protest song I’ve ever heard (why should protest songs be loud and angry?). Jay Rock provides a slick a cappela verse towards the end, while various other musicians make a visual appearance in the video (many of which I didn’t recognise because they’re all masked up).

Leeds rock band, KOYO – who I featured a couple weeks ago on the blog – have dropped their new album, You Said It, today. ‘Out of Control’ is the latest single from the album. It features dreamy vocals over layers of energetic Foo-Fighters-esque guitars (complete with lots of sharp dramatic pauses). The video meanwhile contains bizarre black-and-white footage of a dude piloting what looks like a flying saucer. I’m not sure what it has to do with the song, but I’m digging it.

It’s okay everyone. LA experimental hip hop artist Cubgod is here to save the world. This dude’s ego is almost as big as mine, but right now the world is a mess and we need more people with this gun-ho imma-save-the-world attitude. Beneath the message, the track itself is really fun – I’m loving the wobbling synths and his playful delivery reminds me of Childish Gambino.

This jaunty psychedelic pop-rock track feels both retro and fresh at the same time. The minor key piano riff contrasted with the bouncy major key verses give it a cool bittersweet feel. The LA artist has an album out on the 7th July titled SALT.

I know very little about Belle Delphine except for the fact that apparently SHE’S BACK (from where???) and that she’s definitely not a rapper. Everything from the squeaky voice to the 6IX9INE beat seem like deliberate attempts to be as annoying as possible. The video ain’t even that hot and looks like it was done on a low budget.