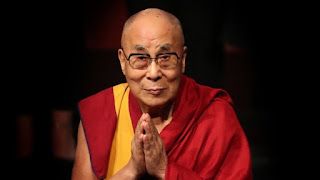 Lots of gems from underground artists this week, as well as a new single from The Dalai Lama himself!

What’s he doing out there in the water with clothes on, the silly sausage? Anyhow, this is another banging single from Irish post-punk rockers Fontaines D.C. The track starts fairly melancholy and then, as the layers of guitar build, it becomes oddly euphoric. The vocals meanwhile are hypnotic as ever. Fontaines D.C. will be releasing a new album, A Hero’s Death, this July.

‘When Will I Get There’ – KMODO ft. Clara Serra Lopez

This new dazzling track is the work of London producer KMODO and features vocals from Clara Serra Lopez. The singing start soft and moody and builds into an explosive chorus to the accompaniment of some glossy warped synths (that added searing synth that comes in at the 1:50 mark is particularly satisfying).

‘You Can Have Everything’ – Closing Eyes

Closing Eyes · You Can Have Everything

This psychedelic single from Norwegian dream pop band Closing Eyes is absolutely gorgeous. The woozy synths and guitars sound like something I’d expect from Tame Impala but with silky female vocals over the top. There’s some cool vocal layering in the chorus including the surprise addition of some male vocals. I also love how the chords disappear in the second verse so it’s just a lone bass guitar and drums. Closing Eyes have a new album out titled Eternal Fidelity for those craving more.

Consisting of lush vocal harmonies and springy guitars, this 60s-psych-rock-inspired track is a lot of fun. It’s got the bouncy energy of a Supergrass song, but slightly more retro and bluesier. The St. Albans band have an upcoming album titled The Doctrine of Infinite Kindness.

This super-smooth track comes courtesy of dream pop duo Moon Panda and comes off their new EP Make Well. Angelic vocal harmonies ride a entrancing groovy bass riff among clouds of reverb-immersed keys – it seems like just the track for a slow drive at night (although it’s so relaxing that it might just lull you to sleep at the wheel). Compared to their previous smoky Tarantino-esque single ‘Rick F***in Dalton’, it’s quite a change in style.

A couple years ago the pope (yes, the actual pope) released an album. Now, the Dalai Lama is also dropping an album (yes, the actual Dalai Lama) titled Inner World. 'Compassion' is the lead single, which you can stream above. I'm not sure what I expecting from it (trap beats? death metal?), but if I'm honest I hoped for more than a dull spoken word ambient piece. I'm probably going to get reincarnated as algae for saying that...
Posted by Alasdair Kennedy at 02:40:00
Email ThisBlogThis!Share to TwitterShare to FacebookShare to Pinterest
Newer Post Older Post Home
Follow @AlasdairKenned1