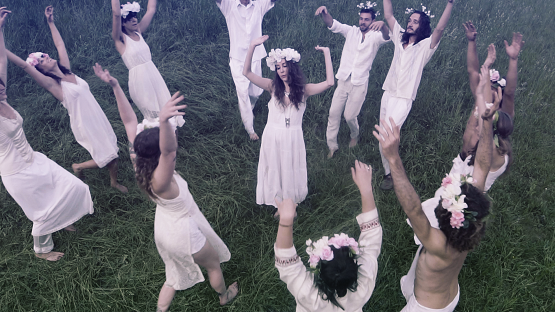 Many of the releases from big artists this week were pretty meh. That Lady Gaga and Ariana Grande duet? Meh. Disclosure’s new single? Meh. This meant I had to do a bit more digging around to find anything noteworthy. Here are some of my best (and worst) finds from the week.

I've already featured a couple tracks from British-Finnish experimental pop artist otta on this blog. This new single isn't even two minutes in length but is still satisfyingly chaotic. It features more of otta's signature deconstructed production, this time with scattergun cries of 'never see!' over the top. As frantic as it is, it still feels very tuneful. A new EP titled Songbook is scheduled for release in July.


There are some odd descriptions of this Brooklyn band’s style online. Earmilk calls them ‘glow-in-the-dark noise pop’, while this Observer post calls them a ‘synth band with soul’. Personally, I’d label this a rock track (those are guitars, right? Where are the synths?). If we’re going to create a niche genre for this track, it would have to be ‘witch rock’. The haunting vocals and lo-fi video give off seriously witchy vibes. It’s the witchiest track I’ve heard for a while.


This new track from Manchester rapper OneDa is all about finding confidence and it’s the type of track that inspires confidence just listening to it. Her flow is pretty tight and the ‘power power power power’ hook is a real earworm. The unique trap/dub-reggae beat is also pretty cool.

Ro · low in the evenings

At first, this track seems to be constantly shifting, transitioning from 80s-electro synths to groovy bass and bright twinkles in the space of a minute. But then it finds its hook and ends up being a truly infectious pop track. I can definitely hear the Grimes influence and I’m intrigued to hear more.

'Easy Bake' is a funky R&b song about baking/getting baked with lots of double entendres thrown in. The sugary beat has a Tyler the Creator flavour to it that blends well with the buttery falsettos. The nutty lyrics are the icing on the cake. Anyway, that's enough half-baked puns.