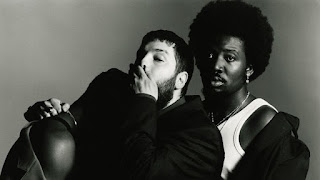 Here are the tracks I’ve been listening to during the heatwave. Artists featured this week include Young Fathers, Lasse Matthiessen, Joe Holt, Chat Pile, Montaigne and Calvin Harris.

Scottish genre-blurring band Young Fathers are back with a new single. It features a satisfyingly euphoric build-up, opening with whispered vocals and subtle pulsing instrumentation, eventually erupting with some explosive drums and bustling layers of vocals harmonies. The title is apt - I feel like we’re about to dive into an exciting new chapter with this band.

This dude’s baritone voice is so low that at first I thought it was pitched-down. It’s a really captivating vocal tone and it pairs really well with the atmospheric detuned Stranger-Things-esque synths. The Danish synthpop artist is planning to drop an album titled Dreams this winter.

Have you ever reached a point in your life when you start reassessing goals and everything feels a bit pointless? ‘Who Cares’ by England-born NYC-based folk artist explores that very feeling of despair. The lyrics are incredibly bleak and raw – perhaps too much so for some listeners. However, personally I get a sense of catharsis from it. The delicate arpeggiated guitar chords meanwhile are gorgeous, especially as the strings build up on top of them. The track comes off his new album Tired of Trying.

Nobody wants to be the first one to kick the bucket in a relationship. Australian art pop singer Montaigne takes this gloomy subject, and turns it into a cute and chirpy hyperpop love anthem. The instrumentation is so infectiously bubbly and it perfectly fits the ‘bubblewrap you, baby’ hook. It’s just the warm blanket that I needed after that Chat Pile track.

So far, none of the singles from Calvin Harris’s upcoming album Funk Wav Bounces Vol. 2 have been nearly as catchy as the tracks on the first volume. I was expecting this song to be up there with ‘Feels’ considering the star-studded line-up of guests, but I can’t even tell which part of this song is supposed to be the chorus. It’s a surprisingly underwhelming track.