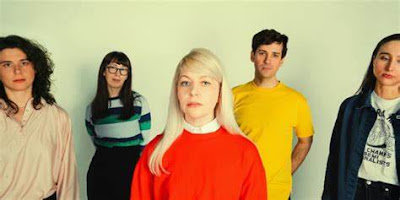 It's been an entertaining week. I'm yet to see the The Rise of Gru at the cinema (I still haven't dug my suit out), but I have enjoyed watching the fall of Bojo. The music this week has not been bad either. Here are the tracks that stood out. Artists featured this week include Regressive Left, Alvvays, Greytooth, Biig Piig, Mieko Shimizu and Cardi B...

‘The Wrong Side Of History’ – Regressive Left

‘The Wrong Side of History’ is a 7 minute dance-rock epic narrated from the perspective of a man realising that his views align with the wrong side of history. The kooky vocal delivery combined with lines like ‘OH GOD! I’m becoming a meme’ result in a comical piece of social commentary. As frontman Simon Tyrie states: ‘What we wanted to highlight is that the subject of the story – your stereotypical sensationalist controversialist white guy – is lamenting their fall from grace from a position of power. These people rule the world right now and they want us to feel sorry for them! But it’s because they know their time is running out.’ Political message aside, this song also happens to be a banger of a tune. An addictive synth-bass riff drives the song along while extra layers of instrumentation build around it. It eventually comes to a huge climax in which the vocals almost sound Bowie-like. The song is the title track from the Luton lads’ new EP which is out July 15th.

Indie pop band Alvvays will be dropping a new album titled Blue Rev in October. This is the first single from it and I’m absolutely loving the detuned shoegazey guitars. There’s even a woozy guitar solo at the end. The dizzying effects almost give the breezy track an element of danger – like going on a waltzer ride with a full stomach.

‘Warm Milk From The Trough’ – Greytooth

This is a change of pace from the last track I featured from enigmatic UK artist Greytooth. The production consists of slow warm keys over distant distorted percussion with elongated vocals over the top that give it a sleepy suspended-in-time feel. The ‘Are you a robot?’ CAPTCHA-themed lyric video is meanwhile very creative and fits the poetic subject matter in which the artificial (‘marble eyes’) and the organic (‘warm milk’) are at odds.

This quirky pop single from Irish singer Biig Piig certainly lives up to its song title. Gentle sighed-out breathy singing is contrasted with an absolutely frantic beat made up of chopped up vocals and breakbeat percussion.

‘Phenomena Of The Mind’ – Mieko Shimizu

‘Yikes! What the hell is this??’ was my initial reaction to this song, but that swiftly turned into ‘Wow! What the hell is this?’ by the end. London-based artist Mieko’s whispered Japanese rapping combined with the chaotic production makes for a really unique and hypnotic song. The track comes off her recently remastered EP of the same name.

Tay Keith clearly didn’t put a lot of effort into this beat, did he? It’s almost comical just how generic it is. Meanwhile, all three rappers seem to be phoning it in. Yeah, it’s certainly ‘hot shit’, but not the interpretation I was hoping for.