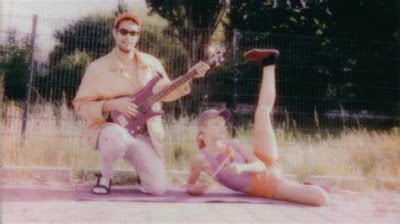 Strongboi, the quirky side project of South African singer-songwriter Alice Phoebe Lou, is back with a new single titled ‘Unconditional’. Alice’s quivering voice combined with Ziv Yamin’s dreamy production sounds so good. There are also some enchanting guest vocals from Salami Rose Joe Louis (I wasn’t familiar with her, so I Googled her and apparently she’s a ‘musician, composer, producer and planetary scientist’. I wasn't expecting that last one).

These riffs aren’t just filthy, they’re putrid. The instrumentation is practically death metal. It’s pretty fitting how disgusting the riffs are when you consider the subject matter. ‘Why do people have to live outside??’ vocalist Raygun Busch questions throughout the track. This eventually turns into angry shrieks of ‘WHYYY???!!!’. The straightforwardness of the message and the pure rage in his voice hammers home just how outrageously gross it is that people are being made to live outside. The track comes off the Oklahoma City band’s upcoming album God’s Country.

A couple weeks ago, Osees dropped a new fuzz-laden rock single titled ‘Funeral Solution’ with violent lyrics about bloody splatter and cracking skills. This new song ‘Perm Act’ is another fuzzy punky tune that’s equally centred around violence – taking aim at police brutality. It’s a simple but very fun track. The video meanwhile features scenes of police brutality that evolve into a comically over-the-top gore-fest with cops eating each other.

Sail are a unique alt rock/metal band from Taunton. Their new single ‘Emotion Motional Ocean’ (try saying that fast) features soaring vocals and reverb-soaked distorted guitars that give it an immensely epic feel. The instrumentation has an upbeat tone to it (I love that opening riff), although there is a darker sludgy riff towards the end that makes for a nice contrast. Vocalist Tim Kazer’s description of the song is quote entertaining: ‘You know the end of Pinocchio with the Whale? Monstro I think. I went back and watched a clip and Gepetto will not stop talking about dying. Like I don’t think there was a single person who made that film thinking “this one’s for the kids!”. Emotions can be that way sometimes though, like being eaten alive. That’s what Emotion Motional Ocean is. One big alt rock emotional monster munch.’

Ontario-based artist Ruru delivers this excitingly unpredictable soul/rock track. It’s a musical maze of sweet jazzy chord progressions and shifting drum patterns. I love the range of guitar effects and the slo-mo reversed snare at the end.  The vocals are very soothing while also being quite dynamic, turning almost shoegazey at the end.

The last single I featured from this Oakland dreampop band was about a year ago, which I described as the ‘dreamiest’ dreampop single I’d ever heard. This track is a little different – it starts off hazy and twinkly, but then adds in some fat synth bass that cuts through the swirling ambience. It features lyrics about confronting heartbreak: ‘I promise you will love again’.

It’s odd to hear now-sober Eminem rapping about weed, and even more odd to hear Snoop attempting a speedy flow. They’re both clearly trying to build some chemistry by borrowing from one another’s styles. But the whole track just feels underwhelming. Em is trying too hard with the puns and Snoop sounds a bit too serious, plus the beat is bland.

‘Catch Me In The Air’ – Rina Sawayama

Meh, this sounds like The Corrs. The type of breezy pop rock you hear during the end credits of every 00s rom com. Definitely not for me.