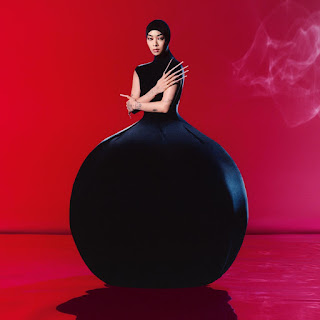 It’s time to round up the most fantastic singles of the fortnight (yeah, I skipped a week again). This week’s roundup features bangers from Kendrick Lamar, Rina Sawayama, OSEES, Ocean Flaws, Carly Shea, Josephine Philip and Palps.

Kendrick’s new album Mr Morale & The Big Steppers is phenomenal (I'll get round to reviewing it eventually). This single isn’t even one of the best songs on the album, and it still slaps. Kendrick’s ability to change up his delivery is unrivalled – he’s like a one-man hip hop collective. The lyrics meanwhile are an attack on superficiality. Take away the mask and you realise that some people are, to quote Kendrick, ‘ugly as fuck’.

This sounds like Shania Twain on steroids (with maybe a little bit of Lady Gaga thrown in there too). It’s one HELL of a pop bop. The guitar riff is an earworm and the chord progressions are wild. Can we start campaigning to get bombastic pop songs like this back on the radio?

Prolific rock band OSEES are back with plans to release what must be their thousandth album to date (possibly even their millionth) titled A Foul Form. If this single ‘Funeral Solution’ is anything to go by, it seems that the band are now taking their music in a more punky direction. Although it’s a pretty straightforward song, the lyrics about wasted life hit hard and the fuzzy guitars are satisfyingly raw.

I got a good chuckle out of this band’s PR email, which contains an array of fake scathing reviews including ‘I haven’t heard anything this nerdy since Alt-J’ and ‘can cancel culture dig up some dirt on these people so we can put a stop to them, please?’. Thankfully, the band aren’t terrible at all. In fact, their new single ‘Keep It Cool’ is spine-tinglingly good. The guitars and synths are so shiny you can see your face in them and I love the intense instrumental crescendo that, after the lovelorn lyrics, plays out like an internal scream.

‘Brush it Off’ – Carly Shea

‘Brush it Off’ is the work of NYC artist Carly Shea. It’s a hypnotic pop-soul bop about letting go of one’s problems. I was immediately hooked by the dreamy synths and 808s, but it was the chorus that really won me over (especially that part where her vocals briefly soar up an octave). The skeletal production gives her voice lots of space to breathe. The song almost feels like one big sigh of relief.

Over some spellbinding production made up of Balearic guitars and crispy percussion (I love that clanging snare), Copenhagen singer Josephine Philip delivers this entrancing pop song about a woman looking back at two stages of her life: at one stage young and carefree, and at another stage older and more cautious.  The song comes off her new album We Get Lost And Found, which you can listen to here.

The majority of breakup songs are one-sided. In the case of most alt rock breakup songs, the narrator is often a dude, portraying himself as a victim while trying to desperately win back the girl he lost. ‘Consequences’ seems like it’s going to be that kind of song at first, but instead lets us explore both sides of the relationship by featuring guest vocalist Kirstie McEwen as the narrator’s ex. It’s a pretty unique concept from what appears to be a very conceptual band – Palps' upcoming album Black Heart will be divided into eight ‘chapters’ with each chapter being given its own video. ‘Consequences’ happens to be the third chapter in the story. I’m intrigued to hear more from the band (concept aside, they’ve got some enjoyably playful instrumentation too!).

‘The Foundations of Decay’ – My Chemical Romance

Emo fans around the world. Sorry to rain on your (black) parade. I know you’ve been waiting yeeeears for a new MCR track. But I’m not feeling this new song. The composition of the track is interesting, but MCR are still sounding way too melodramatic for my liking, and the vocals seem to be weirdly mixed into the distance. Can someone turn up Gerard Way’s mic please?