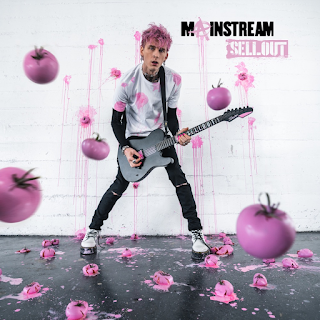 I decided to give the new MGK album a listen. Oh boy…

Back in 2018, rapper Machine Gun Kelly decided to randomly start beef with Eminem – and he ended up getting dissed so hard that he had to quit hip hop. He rebranded himself as a rock star and in 2020 released a pop-punk LP titled Tickets To My Downfall. I never listened to the album, but it topped the billboard charts in the US and has since gone platinum, so the dude clearly has a lot of fans. Of course, as is evident on social media, he’s also earned his fair share of haters, many of whom have criticised him for not being ‘authentic’ (including Slipknot’s Corey Taylor who intriguingly referred to him as a ‘weird substitute teacher’).

Having not listened to any of MGK’s rock stuff, I thought it was about time I gave his music a go. And what better way to get the full MGK experience than to listen to his entire new album Mainstream Sellout? Was I about to become a diehard MGK fan? Would I be ordering online posters of him by the end of the album to put on my bedroom wall? Or would I join the army of fellow haters, waving my walking stick and yelling 'this isn't reeeal rock!'? I decided to find out.

Opener ‘born with horns’ starts off with some crazy drumming. Dare I say ‘experimental’? For a brief moment, I thought MGK was going to take us in an art rock direction. Move aside, black midi! But then the generic pop punk guitars came in and MGK starts singing ‘I don’t want to live anymore’ in his best DeLonge drawl. Oh… so it’s going to be that kind of album.

I’ve never been a huge fan of pop punk, but I can still tell a Dookie from a genuine dookie. This album is definitely the latter, but I will give MGK some praise. He does have an ear for a catchy hook as is the case with tracks like ‘Make-Up Sex’. And he is adventurous enough to add some hip hop flavours into the mix including some rapping on ‘Papercut’, guest verses from the likes of Lil Wayne and some trap beats – he hasn’t completely abandoned his hip hop roots and it makes this more than just another pop punk revival record.

That said, aside from the wild percussion courtesy of Travis Barker on the first track, there’s not really anything instrumentally here that caught my attention. There are no fun riffs to rival Blink or Sum-41, and the hip hop elements are bland. As for the lyrics, well, they're so abysmal that I don’t really know where to begin. In fact, I advise MGK fans check out now, because I haven’t got anything nice to say from here on in.

MGK has clearly been through some shit, but the way he sings about depression, drug abuse and failed relationships makes it sound like he’s glorifying this self-destructive behaviour. On ‘god save me’ we learn his therapist told him to stop taking drugs otherwise he’s going to die, and then two tracks later he follows this up with a love song for his drug dealer. Lines like ‘leave me now before I hurt myself’ meanwhile reveal that he uses self-harm as a manipulation tactic. These toxic lyrics, along with whiny unappreciative lines like ‘I’ve got a house in the Hills and I hate it’, make it hard to sympathise with MGK.

It feels like MGK is trying hard to pander to teenage alt kids, and if so he’s being a terrible role model. Perhaps the thirty-two-year old really is just immature for his age. I mean, just look at the way someone like Billie Eilish approaches the same topic of depression and relationships and you can just see the maturity gap (she’s the role model that alt kids actually deserve).

Alternatively, it’s possible that the whole young, dumb persona is an act – which is arguably much worse than genuinely being immature. I mean, if the ignorant attitude is an act, just how much more of it is a costume? I’d like to think that his passion for rock is genuine (otherwise tracks like ‘emo girl’ may as well be appropriation), and I’d like to think the depression lyrics aren’t just a gimmick. But it’s so hard to tell when he makes it all sound so obnoxious and cliched. Title track ‘mainstream sellout’ could have been a chance to really address his authenticity, but instead he just regurgitates things his haters have said. Perhaps MGK simply doesn’t care enough about the impact of his music to justify himself.

Does MGK stand any chance of winning me over in the future? If he approaches topics like depression and drug abuse in a mature way and chooses more exciting instrumentals, then… maybe. As it turns out, it looks like he’ll be returning to hip hop for his next album. So, let’s see how that pans out…