Review of 'When We All Fall Asleep, Where Do We Go?' by Billie Eilish 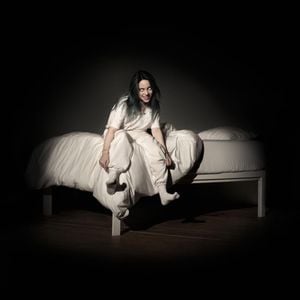 Pop prodigy? Or just another teen artist trying to be edgy?

I hate people that are younger than me and yet more rich and famous than I’ll ever be. Aged just 17, Billie Eilish is the youngest artist to top the UK album charts and fast becoming a household name. I may be an astronaut, a brain surgeon and the best blogger in the universe, but even my successes pale in comparison to hers.

She’s so young that she still wears braces, as she announces with the opening line ‘I have taken out my Invisalign and this is the album’ before breaking in to a fit of teenage giggling. It’s the kind of album opener that would ordinarily get my heckles up if I hadn’t already heard following track ‘Bad Guy’ – which I think is a great song other than the problematic ‘might seduce your dad’ line (we’ll get to that later…).

Fortunately, WWAFAWDWG (even abbreviated it's a chore to write out) is a lot more lyrically mature than I anticipated. In fact, it’s more mature than most albums by artists twice her age. I half-expected ‘xanny’ and ‘wish you were gay’ to be obnoxious trash given their titles, but I was pleasantly surprised. ‘xanny’ isn’t a drug anthem, but completely the opposite – it’s a song about the struggles of being straight edge in a drug-addled world. For an adolescent who should be impatiently longing to reach the legal drinking age, the subject matter is revolutionary and perhaps a sign of gen z’s answer to rebellion (have drugs have become passé and dumb?). Meanwhile, ‘wish you were gay’ is nothing like Katy Perry’s similarly-titled ‘Ur So Gay’ and in fact seems to mock the idea of calling people gay for being non-reciprocal partners.

In other words, to answer my original question at the beginning of this review, Billie Eilish is indeed another teen artist trying to be edgy - but it’s a sophisticated type of edgy and not the childish kind that I expected from a 17 year old. Lyrics that on the surface seem like emo melodrama such as ‘I wanna end me’ on ‘bury a friend’ turn out to have more depth once you delve into the song’s meaning. At times she’s definitely playing the femme fatale just to be cool, but other lyrics feel genuinely personal and profound. I just wish she’d left out the ‘might seduce your dad’ line on ‘Bad Guy’ – this will only attract the wrong type of fan and her producers shouldn't have let it fly.

The lyrics aren't the only adventurous aspect of this album. Production-wise it's also pretty creative, with most of the beats coming courtesy of Billie Eilish’s brother Finneas O Connell (he also wrote some of the lyrics). Unlike the dull glossy trap-flavoured beats every other pop artist is jumping on right now, these are minimal and eclectic instrumentals that dip into dubstep wobbles on ‘you should see me in a crown’ and then contrastingly play with piano balladry on ‘listen before I go’. Not all the musical directions pay off – the ukuleles and chipmunk vocals of ‘8’ are twee enough to make Barney the dinosaur puke – but I respect the experimentation.

All in all, it's not your average pop album - it's daring and it's smart in places, even if most of the songs are still succinct and catchy enough to receive radio airplay. I just hope mainstream success doesn't cause her to lose her quirkiness.
★★★★☆