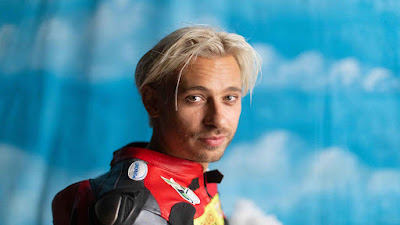 The new Lady Gaga and Justin Bieber tracks are not great. But the new Flume song slaps. And there’s some great underground singles from M(h)aol, Otoboke Beaver and Meltt.

M(h)aol (pronounced ‘male’) are a post-punk band based between Dublin, London and Bristol. They’ve got a new EP out titled Gender Studies, which centres primarily around feminist topics like violence against women and misogyny in the music industry. Their latest single, ‘Desperation’, is pretty menacing stuff. It features a fuzzy pulsing tritone-based riff and defiant lyrics like ‘this is the only body that I’ll ever have’ delivered in an oddly nonchalant tone. The creepy visuals add to the darkness of the track. The song’s only drawback is that it’s so short.

This track is also less than two minutes in length, although it’s so frantic that it kinda gets away with it. It’s the work of chaotic Kyoto punk band Otoboke Beaver, who have a new album out today titled Super Champons. The title ‘I Don’t Want To Die Alone’ suggests that the track has some pretty interesting lyrics, however I was unable to find a translation from Japanese. Like the previous single ‘Pardon?’ that I featured on this blog, it consists of rapid-fire vocals and staccato guitars, with lots of whiplash-inducing tempo changes.

‘Within You, Within Me’ – Meltt

This smooth electropop song has some really addictive vocals. I’d tried to research more into the band and came across the description ‘alternative rock band with a love for heavy riffs’, which leads me to believe they’ve gone through a drastic change in musical direction. Either that or there are two Meltts in Vancouver.

This is another banger from Flume - this time featuring vocals from Damon Albarn. It features a long ambient intro with some warped vocals over the top that sound almost like whale-song. ‘Palaces’ is the title track from Flume’s upcoming album Palaces, which is out May 20th.

The choppy vocals at the beginning are certainly weird, but they’re a lot more entertaining that the bland pop ballad that follows. Can we please stop using those chords? (you know which ones I’m talking about)

I’m going to be honest (SEE WHAT I DID THERE???) here. I really enjoyed the silly joke-rap song that Bieber released during the leadup to this single, even if a lot of other people seemed to hate it. In fact, I wouldn’t mind a whole EP of silly Bieber (a whole album is perhaps a little too far).

As for this song, I’ll pass. He sounds too hard like he’s trying to be Drake.