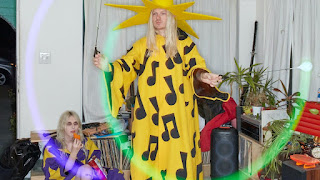 It’s time to round up the best and worst tracks from the last week… wait, no the last month! ALASDAIR, WHERE THE FUCK HAVE YOU BEEN??? I’m sorry, I’m sorry, I spent the last three weeks trapped in an Easter egg induced coma after eating 7000 eggs. JUST KIDDING, I didn’t get any Easter eggs and spent the last three weeks crying non-stop into my pillow. Anyway, I'm back now now, so let’s do this blogging shit. Artists featured this week include 100 Gecs, Empress Of, Kirk Hammett, Flume, Similar Kind, Automatic, Bearcubs and 6ix9ine.

It’s very rare that I fall in love with a 100 Gecs song straight away. In fact, I’m still largely undecided as to whether I love or hate the majority of this duo’s discography. ‘Doritos and Fritos’ seems to be more rock-flavoured than previous songs, which may be why it’s won me over. Those creative clanging guitar dead notes along with that funky bassline are so addictive. I’m not so keen on the auto-tune-slathered chorus, but at least they’ve stripped away the gaudy auto-tune from the verses this time. As for the lyrics, they’re utterly stupid, but in the best way possible: ‘I’m eating burritos with Danny DeVito’.

Don’t be deceived by the slow opening. About thirty seconds in, this song suddenly transforms into a wild raunchy banger. I love those dramatic string squeals (although, I must admit, the first one did make me jump). The production is some Lorely’s most creative since her 2015 album Me. Meanwhile the vocals and lyrics are some of her most racy to date. This isn’t just regular sex music – it’s music for ripping one another’s clothes off to.

Metallica guitarist Kirk Hammett has recently dropped a solo EP titled Portals. This single ‘High Planes Drifter’ comes off the EP and packs a lot of cool twists and turns into its runtime. There’s a lot more flamenco influence in there than I was expecting, although you can still hear that signature Metallica sound poking through (particularly when the distortion kicks in at the end). The EP is apparently inspired by a bunch of different genres from horror soundtracks to classical. As a diehard Metallica fan, I’ll definitely be checking it out.

I had the impression that Flume made pretty standard Steve-Aoki-esque EDM, so this surprised me. The sound design in this track is really creative - those stuttering synths and clanging hyperpop snares sound really futuristic. Caroline Polachek’s soft choir-like voice meanwhile floats gorgeously over the top. If I’m not mistaken, ‘sirens’ were creatures from Ancient Greek mythology that would lure sailors to their deaths with their beautiful voices. Listening to this track, I feel Caroline Polachek’s beautiful voice is doing just that and I’m unable to break away.

‘There She Was’ – Similar Kind

‘There She Was’ is a song about being infatuated with a girl - but it becomes quickly evident that it’s really a song about drug addiction. The song perfectly captures the feelings of a down-in-the-dumps addict. Despite a brief euphoric high at the two minute mark, it’s largely made up of woozy psychedelic effects and glum descending melodies. It’s very different from the band’s usual style of indie pop (which is also worth a listen!).

This track from LA three-piece Automatic is pretty minimal, but totally captivating. It’s got a catchy bass riff and simple ‘mmm-mmm-mmm-mmm’ chorus, accompanied by some pretty creative percussion sounds. It comes off their upcoming album Excess.

‘In The Flowers’ – Bearcubs ft. Thala

This is one of the wooziest songs I’ve heard in a while. The effects-drenched guitars paired with dreamy vocals made me feel as if I was melting into my chair.  The production’s got a chillwave vibe to it that reminds me of early Washed Out, but it feels even richer in texture. British singer-producer Jack Ritchie, the man behind Bearcubs, collaborated with several friends to make the song (including his friend Thala who provides some angelic guest vocals).

‘Lock-l-lock-l-lock-lock’ this man away again and throw away the key. That chorus is a crime against music.