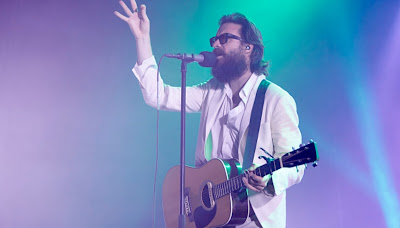 ‘The nazis that we hired for our wedding band…’. That’s certainly one way to open a track. Father John Misty delivers some of his most dense and vivid lyricism to date in this gloomy closing song from his new album. The instrumentation has an ominous quality that gives it an end-of-the-world feel. I also love how he (SPOILER ALERT) ambushes us with that wailing distorted guitar solo half-way through. Certainly not what I was expecting in an FJM track.

Talking of unexpected wailing distorted guitars, have you heard this new Toro Y Moi song? He’s drifted a long way from his early chillwave origins, and is now making psychedelic bluesy rock. It has a Rolling Stones/Beatles vibe at first and then goes a bit Hendrix-inspired at the end. Even if it is drawing heavily on old sounds, it still feels quite playful. I also appreciate how well he’s able to pull off that nun bonnet. The song is set to appear on his upcoming record MAHAL.

Totally Enormous Extinct Dinosaurs is the wonderfully named solo project of British-American indietronica artist Orlando Higginbottom. According to Higginbottom, this new song ‘is about melting glaciers and wanting a daughter’. It’s made up of some chillingly frosty synths, topped with vocals soaked in a icy reverb. And yet there are still moments of warmth such as those gorgeous harmonised ‘oohs’.

This Sydney-based singer-songwriter has quite a unique vocal tone as can heard in his new single ‘Fear’. I love how his voice glides softly over the tumultuous guitars. The track also has some really intense and creative drumming. Most of the alt rock I get in my inbox nowadays is just Radiohead or QOTSA worship, so it’s great to hear an artist that sounds a bit different.

After a long and beautiful cinematic introduction, ‘Interceptor’ blasts the listener with some absolutely grotesque distorted bass before plunging into a chaotic drum-and-bass drop. The kick sounds like a Transformer being thrown down some stairs. It’s mental!

I was expecting the marching band beat to evolve at some point, but it doesn’t. In fact, it only gets more irritating as the track goes on. I’m sorry Q, but ‘Soccer Dad’ is a miss.