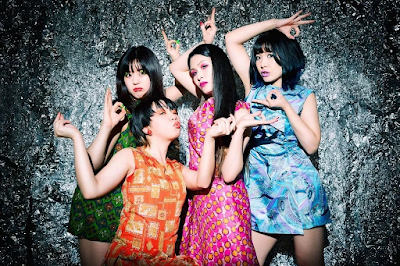 It’s hard to believe that this is the same band that were dropping shouty dissonant noise-rock jams a decade ago. Their sound is much more synth-heavy and melodic now, but still utterly unique. ‘Live Exponential’ is a simple but euphoric track made up of blasts of glittery synths, powerful stomping drums and sparse breathy vocals. It’s a complete sugar rush (especially those arpeggios at the end!). The song comes off Guerilla Toss’s new album Famously Alive, which I’ll definitely be checking out.

This song is completely berserk and I loved every second of it. Otoboke Beaver are a punk rock band from Kyoto. They’ve got a pretty chaotic sound – ‘PARDON?’ is a breakneck-speed rock freakout full of sharp starts and stops and topped with crazed yelled lyrics. Their new album Super Champon will be dropping this year and features some incredible track titles including ‘Leave me alone! No stay with me!’ and ‘you’re no hero shut up fuck you manwhore’.

‘Beside Myself’ – Les Ailes

Seattle singer-songwriter Les Ailes has released this new enchanting song from her upcoming EP. The shuffling drums, jazzy guitar and angelic vocals make for a unique melancholy sound (the flanged synth at the end is a nice touch too). I also like the dual meaning of ‘beside myself’ in the lyrics.

Dublin post-punk band Fontaine D.C.s are dropping a new album Skinty Fia in April and this is the title track. It features energetic breakbeat-like drums and ethereal guitars. Grian Chatten’s delivery is fairly monotone, but it makes for quite a cool contrast against the intense instrumentation. Apparently, ‘Skinty Fia’ is an old Irish swear word, which roughly translates as ‘damnation of the deer’ (in case you were wondering).

As Loud As A Mouse are a rock duo from Reading and their sound is right up my alley. The vocals are wacky and surprisingly dynamic, shifting from staccato punky yelling to almost grungy melodic singing. The racing guitars and drums meanwhile have a nice raw feel to them while still sounding crisp (I love the way that thunderous snare roll sounds at the 3 minute mark). If you love groups like Idles, Shame and Squid, then this is definitely a band to watch.

‘Not The One’ – Red Hot Chili Peppers

It lives up to its title.