BEST AND WORST NEW TRACKS OF THE FORTNIGHT 18/03/2022: Benny The Butcher, Meat Wave, The Chainsmokers and more… 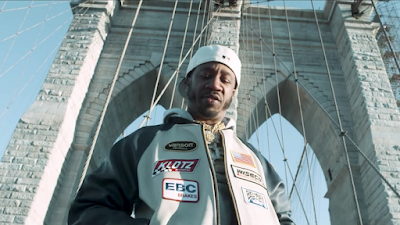 I didn’t do a track roundup last week, so here’s a track roundup of the last two weeks. Artists featured this week include Benny the Butcher, Meat Wave, goldenbloom, Quiet Man, Kalopsia and The Chainsmokers.

This new song from New York rapper Benny The Butcher is a sequel to ‘Ten Crack Commandments’ by Biggie Smalls. Like its predecessor, it’s essentially an instructional guide on how to become a drug kingpin – only this time made relevant to 2022. It’s got a phenomenal beat and Benny’s bars are crazy. If I ever do decide to become a dealer, I’ll be sure to return to this song for inspiration.

Chicago rock trio Meat Wave grabbed my attention last year with their intense single ‘Yell At The Moon’, which ended up making my favourite tracks of 2021. ‘Honest Living’ is another intense song made up of frantic guitars, exasperated vocals and wiry bass. The juddery footage of Chicago making up the video matches the mood perfectly.

‘Chin Up’ is a middle finger to toxic masculinity – a song encouraging men to open up about their problems and let out their emotions. It reminds me a bit of Idles’ ‘Samaritans’ in its message and features some equally fantastic heavy-hitting lines: ‘you’ve got 99 problems and you told no-one’. It’s also got some satisfyingly fierce drums and guitars. The London post-punk scene is truly thriving right now.

Quiet Man and Sid Stone are two UK singer/producers who are also both brothers. You can definitely hear the chemistry – the falsettos during the chorus and lower-register vocals during the verse complement each other really well. However, it’s the groovy creative beat with its punchy clap/snare and splashes of sax that really makes this track stand out.

This dreamy electro-pop single is the work of Brisbane artist Kalopsia. The woozy synth-funk production and breathy delicate vocals make for a really hypnotic combo. It sounds like something you’d hear blaring out of an alien disco.

How do they do it? How do they manage to create such impressively bland EDM songs?