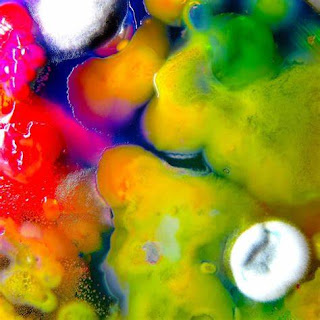 Guerilla Toss sound almost unrecognisable from the screechy guitar-centric skronk band that they started as. Over the past decade, they’ve gradually made their sound more accessible, adopting discernible grooves on Eraser Stargazer, embracing more synths and less screeching on GT Ultra and sounding almost like a new wave band on Twisted Crystal (albeit a strangely psychedelic new wave band).

Now on Famously Alive you could barely call them a rock band. There are glossy synths everywhere and Kassie Carlson’s vocals have never sounded so sugary. Meanwhile, gone are the doomy lyrics of songs like ‘Skull Pop’, replaced by some of the band’s most upbeat lyrics to date. Tracks like ‘Famously Alive’ celebrate loving oneself like a celebrity, while ‘Happy Me’ lives up to its title with lines like ‘I’m alive, energise, fuck the quitter’.

Some listeners may see this as Guerilla Toss’s sell-out record because of its poppy palette. I’d agree that tracks like ‘Mermaid Airplane’ sometimes venture a little too far into bubblegum pop territory (the autotuned nursery rhyme melodies are a bit nauseating and the chorus has an off-putting Chainsmokers vibe to it). However, for the most part, these tracks are still relatively noisy and compositionally wild enough for a weird-music-loving freak like me.

‘Famously Alive’ is one of the best examples. At its core is a fairly conventional descending pop melody that drives the vocals and guitars along. However, the distorted kick drums and relentless snare give it an unsettling intensity. The intermittent dissonant power chords, jilted time signature and random psychedelic interlude meanwhile further give the track a sense that it could fall apart at any moment. If the band were trying to write a radio-friendly hit, they've failed miserably.

Other tracks are similarly chaotic. ‘Excitable Girls’ trolls the listener with a long suspenseful build-up that leads to nothing. ‘Happy Me’ meanwhile dissipates into a woozy detuned looped section that borders on vaporwave. It's these inventive moments that have kept me coming back.

Autotune will always be my enemy, and there is a lot of autotune on this record, which at times I found hard to sit through (i.e. ‘I Got Spirit’). However, I love the way in which the band otherwise play with poppy elements such as the bright synth blasts on ‘Live Exponential’ and hooky vocals of ‘Heathen In Me’, while still keeping these tracks unhinged and unpredictable. The cheery lyrics are inspiring too. Finding positivity within chaos seems to be the message of this album, which is very apt for these times we live in. The overall sound meanwhile is very unique – it’s like a post-punk/hyperpop hybrid and I'd love to see it developed further.