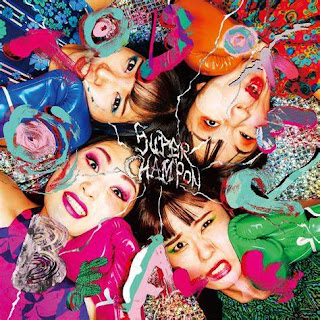 Named after a love hotel in Osaka, Otoboke Beaver make music that is loud, fast and provocative. Super Champon is their latest album. According to the band, a ‘champon’ is ‘a Japanese noun meaning a mixture or jumble of things’. Also, it ‘sounds like champion’. It’s a suitable title as the album does indeed feel like a victorious jumble of ideas.

In just over 20 minutes, the band manage to cram in 18 songs. Each song starts and stops abruptly and contains numerous whiplash-inducing transitions including sharp tempo changes and riffs that interrupt other riffs. At times the speed is impressively fast (as on ‘I Checked Your Cell Phone’), launching into intense sections of dissonant tremolo-picked guitars and spidery bass riffs. Catchy chants and chaotic shrieks make up the vocals, which match the intensity of the instrumentation.

The lyrics are equally abrasive, often revolving around feminist themes delivered in an aggressively direct fashion. It’s not the type of subject matter you typically hear from an all-female Japanese band. At the same time, they don’t just sound like your average bratty US riot grrrl band, bringing their own unique sense of humour to each song. The track titles alone are hilarious – my favourites being ‘Leave me alone! No, stay with me!’ and ‘You’re no hero shut up f*ck you man-whore’. Vocalist, Accorinrin, switches between singing in English and Japanese. The English parts definitely make this band more accessible to a western audience than they might otherwise be, and even though some of it is in broken English, it adds to the humour and reinforces their IDGAF attitude.

Most of the album’s ‘fleshed-out’ songs (i.e. those over a minute and a half) come towards the beginning, while most of the songs under 1 minute end up being bunched up at the end. As a result, the album ends up feeling a bit lopsided in terms of quality, with most of the best tracks being in the first half, while the second half is mostly just odds and ends. Otherwise, it’s a thrilling record. They've got a uniquely hectic sound and an attitude that's fun as it is confrontational.