Review of 'Vulnicura' by Bjork 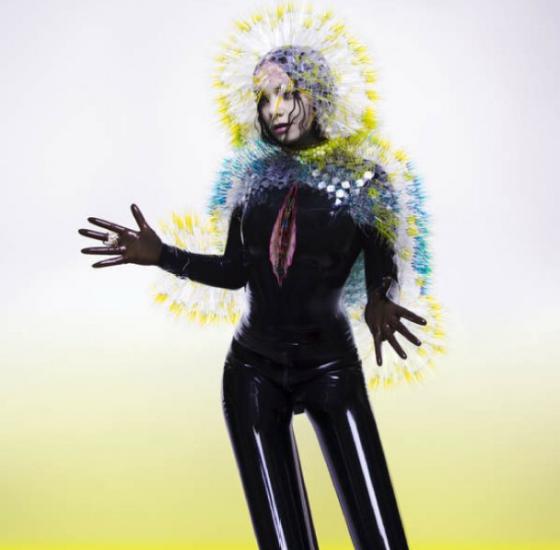 Vulnicura marks another weird and wonderful chapter in the eccentric Icelandic singer’s discography. I tried googling a definition of the album title but couldn’t find anything. Where does Bjork come up with these names?

Her last record Biophilia was one of her most avante-garde so far, delving into genres as bizarre as breakcore. At first, I though Vulnicura may be a step into tamer, more straightforward territory. However, whilst the first songs certainly suggest this, the album swiftly goes off on an experimental tangent dropping the verse-chorus-verse-chorus structure entirely for an unpredictable ride through musical hinterland.

This is definitely one of Bjork’s most emotional works. Fueled by her recent breakup she exchanges catchiness and bounciness for a slow pensiveness. Sadness works best with good old-fashioned violins, and so it makes sense that the instrumentals here are all primarily made out of string sections. Accompanying these strings are juddery, electronic drums, similar to the percussion on her previous releases. It’s clear to see where modern artists like FKA Twigs get their ideas.

Often the slowness drags this album down, particularly on the ten minute ballad ‘Black Lake’. There are periods of the song in which a single string note is seemingly stretched out for eternity, during which I could feel myself ageing.

Fortunately, the pace seems to improve after this track. ‘Family’, although sluggish at first, goes through multiple progressions. It starts with eerie cinematic percussion (which I wasn’t surprised to learn was produced by The Haxan Cloak), before breaking into rapid dissonant plucked strings and then finally climaxing with a soothing ambient section. Bjork’s voice sounds bleak and distraught on this track and it’s definitely the most powerful track on the album. The hairs rose on the back of my neck and tears threatened to run down my cheeks at points.

This song and several of the tracks afterwards, particularly ‘Atom Dance’ and ‘Quicksand’, are definite peaks that spice up the landscape of the album. The remainder is a bit glacial. The icy atmosphere is spectacular but the slowness is painful. Bjork’s choice to sacrifice catchiness is also a shame. I’d like to see myself returning to this record simply for its ability to tug on the heartstrings. Were all the tracks as dynamic as ‘Family’, this could have been a masterpiece.
★★★☆☆