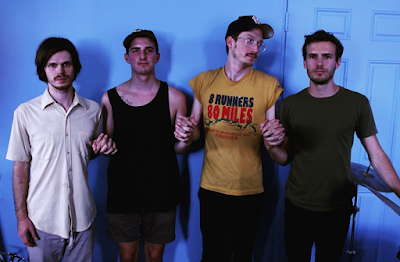 Their latest album Nice Mask Over An Ugly Face sees them tightening up their sound, the result being punchier, groovier and overall weirder. Think Holy-Fire-era Foals were they to lose their marbles and go oriental whilst incorporating distorted clarinet solos. That's what Wei Zhongle sound like.


Having scoured the internet for more background information on the band and came up empty-handed, I hoped an interview may be able to provide more insight into the inner workings of the mysterious group. The band responded to my interview opportunity with the following opening statement.

‘Wei Zhongle are currently being held at an undisclosed location due to ongoing investigations. These answers are being provided through a surrogate and are as follows’

Ongoing investigations? I was unable to gleam further information from the group, however I did manage to get into an enlightening discussion involving Woody Allen and Obama. Read on below…

If Wei Zhongle was a pizza what toppings would it have?

I tried doing some Google research into your band name and came across this article (my Chinese isn’t too good): https://zh.wikipedia.org/wiki/%E8%A1%9B%E4%BB%B2%E6%A8%82 Who was Wei Zhongle and what made you guys name your band after him?

There’s a heavy Chinese influence in your music. Have you guys ever been to China?

WZ: Thank you for noticing. Yes. Once. It was nice. Hope to go back.

Theres a heavy Martian influence in your music. Have you guys ever been to Mars?

WZ: Thank you for noticing. Yes. Once. It was nice. Hope to go back.

Your new album is titled ‘Nice Mask Over An Ugly Face’. What or who inspired the title?

There’s some crazy clarinet playing on this album. Who do you look to for clarinet inspiration?

How did the ‘Wei Zhongle Drives Very Fast Tour’ go? How fast did you drive?

WZ: As fast as our diplomatic immunity will allow us.

What’s the Chicago music scene like and are there any bands right now that you think people ought to know about?

This music video is quite the trip. Who is the creepy claw lady and where can I get a psychedelic portal hat?

WZ: You are the creepy claw lady and the psychedelic portal hat is right in front of you. It's in front of all of us. Don't look too hard.

What does the future hold for Wei Zhongle?

WZ: I am confused by your question. The future has not yet happened. The past held goodness. A hand holds flowers. A bowl holds fruit.