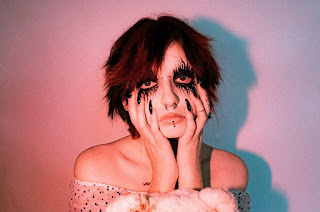 Music to listen to while getting rich on GameStop stonks.

Prolific Aussie band King Gizzard & The Lizard Wizard have released 16 albums since 2012 (the last one dropped a month ago) and they are already gearing up for another album. Are they ever going to take a break? They’ve tackled multiple genres in their career – this new single ‘O.N.E.’ appears to be a bit of a medley of everything they’ve done. It starts off deceivingly with lazy harmonica and slow twinkling keys before transitioning into an upbeat Middle-Eastern-flavoured rock track. The microtonal guitar is really cool.

This chick has really gone to town with the creepy visuals, hasn’t she? It’s enough to leave even Marylin Manson quaking in his boots. I half-expected some evil metal riffs to come in, but it’s a pop song through-and-through.  The reverb-soaked vocals and bare instrumentation do give it an enjoyably ethereal vibe and the lyrics surrounding a toxic relationship are pretty chilling. The video simply serves to amplify the gloomy mood. It’s definitely got me interested to hear more from this 18-year-old Californian singer.

To quote the press release: ‘Earthquake is a battle cry on behalf of women who are deemed obsolete by a popular culture that champions female youth and servitude’. The exciting proggy electropop track plays out like an outpouring of sexual frustration. As the frustration builds, singer Mella Faye’s vocals become more impassioned and the drums become more dense. It eventually finds its release in the form of an eargasmic synth solo. The accompanying video meanwhile features 70 year old actress Gillian Daniels getting it on in a surprisingly tasteful soft porn sex scene. A new album Oedipus will be dropping from the band soon.

Unapologetic expressions of female sexuality seem to be a running theme this week and I’m all for it. ‘Dreamstate’ is a catchy rock anthem from Brisbane artist Sabrina Lawrie that is all about sex. It’s accompanied by some of the most ridiculously fun riffs I’ve heard in a while. RIFF-DICULOUSLY FUN. I’ll show myself out…

This groovy synthpop track is the work of Pittburgh singer Evan Isaac, and features production from Delhi-based indie electronic artist Shoals. The song explores the feeling of being deep in love while also regretting not making the most of these moments after they pass (at least that is what I interpreted from the melancholy chorus). Those that want to hear more music by Evan can check out his latest album Dogwood Dignitaries Listen to the Baby here.

This dude has been watching way too much Twilight.