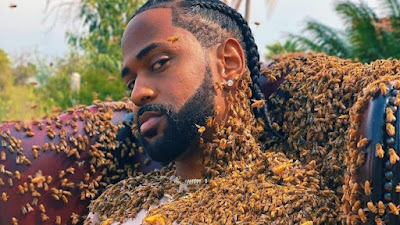 IS THIS DEATH GRIPS? The latest track from Bristol post-punk outfit Idles features frontman Joe Talbot semi-rapping over noisy abrasive guitars. Inspired by a real-life road accident that Joe was involved in, the song succeeds in capturing the intensity of a car crash. I particularly love the chilling bit where it careens off into screams before stopping dead: ‘smash’. There’s a brief slither of grungy melodicism towards the end, but otherwise it’s uncompromisingly dissonant. It has me pretty excited for their upcoming album Crawler.

Jazz-funk band Hiatus Kaiyote were the last group I expected to release a creepy Halloween single. Their music is usually sweet and pretty, and, well, this isn’t. While the track is still very jazzy, it features semi-distorted vocals and lurching instrumentation in order to give it an unsettling spooky feel. The ghost-train-themed music video is a fun campy touch.

Big Sean is back and he’s no longer releasing music under Kanye’s label G.O.O.D Music (beef alert!). This first new single sees him partnering up with record producer Hit-Boy – and it’s a banger. I’m loving the hi-octane beat and the relentless delivery of his rapping. The music video is also pretty wild. He literally covered himself in 65,000 bees while shooting it.

‘Fall With You’ – Darkroom Data

The last track I featured from electropop duo Darkroom Data, ‘Groovata’, was an experimental psychedelic journey. This new track is a lot more straightforward, but still just as captivating. The breathy delivery of ‘faaaall with you’ and the swirling synth pads give it a haunting feel, and yet it still delivers a lot of energy with its driving beat.

You can thank Aquarium Drunkard for this find. Apparently, it was ‘excavated from a box of tapes during lockdown’. With its lo-fi sound and distant vocals, it seems just like the type of track you might uncover on a dusty cassette tape. It saddens me to think of how many gems like this are lying on dusty cassette tapes going unheard, doomed to ‘disappear’ into the void of time.

The elongated off-key delivery of ‘I don’t really cuuuuuuur’ towards the end is one of the worst things I’ve heard all year. I also find the line ‘I make trends’ hilarious. Mate, you haven’t started a trend in your life. You’ve been copying other rappers since day 1.