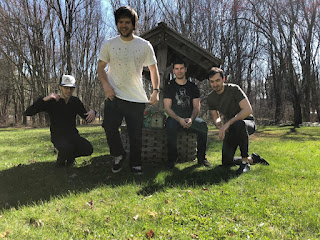 There weren’t too many huge tracks released this week, which is great because I could focus my attention on catching up with all the submissions in my inbox. Artists featured this week include Ovlov, Basement Revolver, Flynt, Kemetstry, Onipa and Code Orange.

Hungry for some lo-fi moody indie rock? Feast your ears on this new track ‘Eat More’ from Connecticut Ovlov. Only a few weeks ago, I featured the band’s bromance-inspired single ‘Land of Steve-O’. This track has a similar fuzzy lo-fi quality – it alternates between clean guitars in the verse and distorted guitars in the chorus before breaking into a howling shoegazey section at the end. Their new album Buds is out today.

I wanted to feature this track last week, but didn’t enough room. Anyhow, here it is. Basement Revolver are an indie rock band from Hamilton, Ontario. Their latest track ‘Tunnel Vision’ is a reverb-smothered shoegazey mix of soothing vocal harmonies juxtaposed with roaring guitars and clanging snare. The result is both pretty and pummelling.

‘Flynt Pop’ is the debut single from New York post-punk band Flynt. The driving bassline and effects-slathered guitars had me hooked and the skittering hi-hat and euphoric ‘do do do’ vocals at the end sealed the deal. ‘Flynt Pop’ set to appear on their forthcoming EP Introducing Flynt.

UK underground rapper Kemetstry is back with his unique brand of lo-fi imagery-heavy hip hop. I featured mean and gritty track ‘No Respect No Manners’ earlier this year. ‘Astral Plane’ features a similarly spooky beat and is loaded with fun and wacky bars that contain everything from Ronnie Pickering to spaceships under the Pentagon. Literally every bar is fire!

Speaking of fire, check this gem out. It’s the work of UK/Ghana Afro-futurist project Onipa and is off their latest album We No Be Machine. The instrumentation is wild – the bass riff has been stuck in my head all week.

‘Out For Blood’ - Code Orange

This sounds like something off an early 00s WWE game.