BEST AND WORST NEW TRACKS OF THE FORTNIGHT 02/12/2022: Metallica, Pharrell Williams, Chance the Rapper and more... 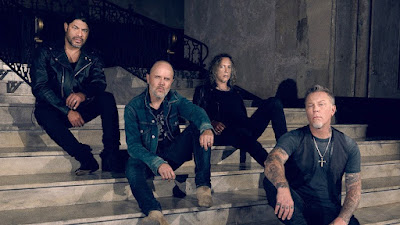 This week has everything from Pharrell beats to Metallica riffs. I did think about featuring some Christmas songs given that we're now in December (I've had artists bombarding my inbox with Christmas songs since September!), but there were too many great non-Christmassy songs that I thought deserved more attention. Other artists featured this week include Diamond Revolver, Natalie, Caleb Peters, O., Humour and Chance the Rapper.

Thrash metal legends Metallica have announced a new album 72 Seasons (out April 14th next year), and have just dropped a new surprise single from it titled ‘Lux Æterna’. It’s one of the most straightforward tracks Metallica have ever released, but it still rocks – Lars is going full throttle on the double bass drums and there are some awesome riffs that have an almost Kill Em All feel.  I wonder if all the tracks are going to be this succinct. It would make a nice change of pace from the lengthy and laboured tracks on their last two LPs.

This is the most melodic that Travis Scott has sounded. Pharrell’s production is meanwhile reliably fun. I’m loving the moody bassline in this track and the bright chords during the chorus. How does he manage to craft beats that sound so digital and yet also so organic? The track is set to appear on an upcoming 2023 Pharrell album titled Phriends.

‘Diving’ is the work of Buffalo-based psych-pop artist Diamond Revolver. The track immerses the listener in its reverb-drenched dreamy production. I can’t get enough of those heavenly vocal harmonies in the chorus that seem to float at the listener from all angles. There are also some cool drum fills in the middle of the track that spice up the track further.

This infectious alt pop bop is the work of rising US singer/producer Natalie. It features an addictive bass guitar riff and some breathy-but-bubbly vocals that sound a bit like a more energetic Billie Eilish. The lyrics meanwhile describe a toxic up-and-down relationship with clever lyrics that could be interpreted as either lust or abuse: ‘love me/ choke me/ torment me all night’

‘ROUNDABOUT’ is a noisy and equally euphoric serving of hyperpop/synthpop. 19-year-old singer/producer Caleb Peters delivers some catchy auto-tuned vocals over a patchwork of creative synth sounds and distorted drums (courtesy of drummer Anthony Cronk, who he plays live with). The whole thing is pretty heavily compressed, but this gives it an intensity that makes you feel like you’re hearing it live.

O. is a South London duo made up solely of drums and sax. These are played through amps and pedals to provide a variety of effects - in this case, using them to give the sax a beefy sound. The most impressive part is undoubtedly the speedy drumming. It’s so fast and yet so tight. Imagine these guys are amazing live!

Even the most self-assured people occasionally have lapses in confidence. ‘Jeans’ is a track about just that – throughout the track, the boastful narrator keeps telling themselves ‘I come first place’ only to take his car for an MOT and get poked fun at for his jeans. ‘WHAT’S WRONG WITH MY JEEEEEEANS??’ Like previous singles, the vocals are thrillingly unhinged, and the guitars are equally deranged

As much as I like the speedy rapping here, the production on this song is way too cluttered.  That chopped-up Whitney Houston sample does not let up. By the end, I had a migraine.